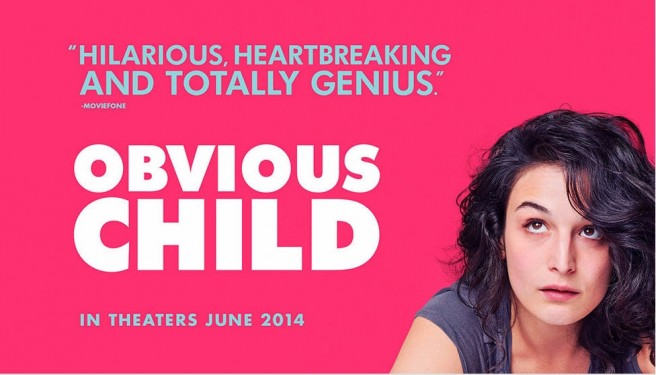 I apologize for being a couple of months late to the game, but this past week I finally got the opportunity to watch the film Obvious Child, starring Jenny Slate.

The film received a lot of attention when it premiered this past June because the topic of abortion was at its forefront. Dubbed the “abortion rom-com” by many a reviewer, it received praise for handling a serious and complex topic with such normalcy. The premise of the fim is that the main character played by Slate, Donna Stern, gets broken up with, has a one night stand as a way to cope, and then finds herself pregnant as a result. The film’s director, Gillian Robespierre, said that she never wanted the film’s conflict to come from whether or not Donna would get an abortion, that she would come to that decision on her own and stick to it from the beginning. Instead the conflict would ignite the romantic-comedy aspect of the film and follow the relationship between Donna and her stranger sex-partner, Max, played by Jake Lacy.

I have to admit I had very high hopes for the film because of all the positive attention I had seen it accumulate this past summer, and my expectations were definitely lived up to, if not succeeded. Donna’s story is not unusual, her fictional character joined the 1 in 3 women  who will have an abortion in their lifetime. The film didn’t sensationalize abortion, or depict it as a frightening experience. Robespierre said that in her film her goal was to make the choice to have an abortion a safe, legal, and accessible option for her character, a representation that she had not seen in mainstream film. Obvious Child approached the scenario with tenderness, sensitivity, and a touch of humor that really helped to break down the stigma surrounding abortion in our country. 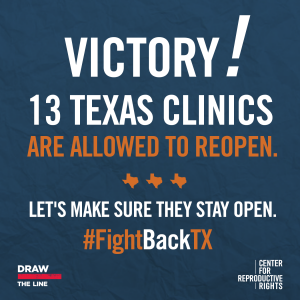 photo from: Center for Reproductive Rights

Watching Obvious Child was a very timely choice on my part considering that abortion access in my home state of Texas was once again covering the media headlines, but this time for a positive reason. This past Tuesday, the Supreme Court allowed more than a dozen clinics to reopen in Texas that had previously been closed because of restrictive laws that had been implemented in September across the state. Prior to their re-opening there had been no clinics operating West or South of San Antonio.

You can read more about the court ruling and abortion availability in Texas here:

Having positive and accurate representation of controversial issues such as abortion is so necessary in our media climate in order to combat the stigma surrounding the topic. Saying that Obvious Child helped to change the state of abortion access in Texas might be a stretch, but if anything it’s through films like these that people are able to make different realizations about topics that are so deeply personal and complex.