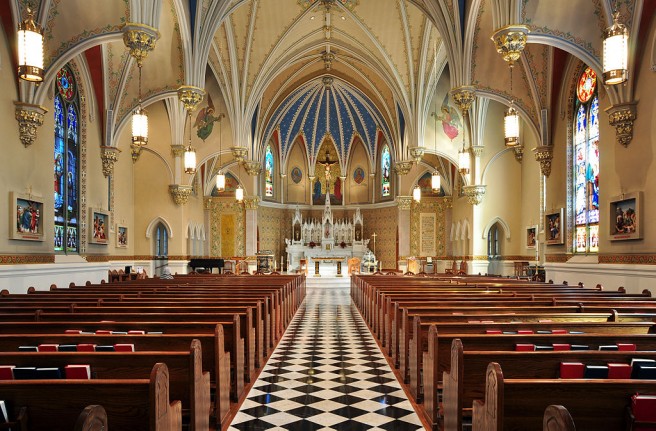 I’m what you would call a cradle Catholic. I was baptized as a baby and I have been Catholic since. I go to Mass, read my Bible and say the rosary. I went to Catholic school from the time I was three years old until I was 14.

I am also a reproductive justice activist.

It is no secret the Catholic Church has always been very openly against abortion and, in a lot of cases, contraception. I don’t really know if there was ever a time where I decided and openly said that was incorrect and I was going to go against the teachings of the Church, I think it has always been a part of me. Deep down, I always knew it was wrong to deny abortion and birth control access to people.

This caused me to feel ostracized in a place I considered my home and a place I went to find peace. In Mass or other church functions I would hear the propaganda against abortion and birth control and it always caused a certain discomfort in me. I never understand this obsession with decreasing abortion access and denying people the right to make their own decisions with their bodies.

I was also confused because my devout Catholic mother has told me since I got my first period to always use contraception because an unintended pregnancy would be a nightmare.

In my mind, this meant I would obviously always use contraception, but I also wanted a backup option. Condoms break, birth control doesn’t always work, and then what? I have a future to think about and the last thing I needed in high school or, now, college was a kid. I know this works for some people, but it’s terrifying or me.

So now I am a devout Catholic, fighting for abortion access. I am prepared for people to tell me I am going to Hell, shouldn’t be able to live with this on my conscience, a bad Catholic or whatever else they can throw at me. But I’ll say this: my conscience has never been cleaner.

I am also not alone. Catholics for Choice is an organization created by people like me — devout Catholics who also believe in contraception and abortion access. The organization wants to shift the abortion and contraception conversation to one that looks at each person’s conscience and moral choices as how they make decisions.

Put simply, people should be able to make their own choices based on what they are comfortable with.

I am not here to argue about the doctrines of the Church or people to tell me to just not have sex. I went to Catholic school so I’ve got the doctrines down. I will never let anyone tell me what to do or not do with me body. So don’t even try it.

I am here to tell anyone else feeling the way I used to feel they are not alone. There is a way to keep going to Mass and not feel guilt, but at peace.

When I started writing for URGE, I knew there would be people who thought I was going against the Church, and that’s okay. It doesn’t really bother me anymore, because I know the work I do is important and I will always fight for safe sex and abortion access.

It hasn’t always been easy, but it has definitely been worth it.

One Response to “My journey as a Catholic Reproductive Justice activist”