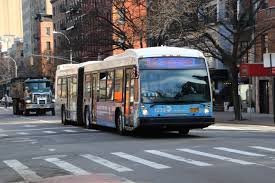 As school starts up, my attention has been turned towards public transportation. Since I am a college student without a car, that means I have to take the bus to school. Well, more like two busses to get there and two to get back. For my area, public transportation means the bus system, paratransit (for those with disabilities that prevent them from using typical routes), and a few trolleys covering the center of the city. Right now I’m navigating the city while living at the corner of “you need a job to get experience, but they won’t hire you without experience” and “you need a car to get a job, but you need a job to get a car.” So when I saw this video from Patriot Act about public transportation, it caught my attention.

If you don’t have time to watch it right now, it covers the struggles of using public transit and how U.S. cities have been swayed to invest less in their systems. Spoiler alert: a good portion of that swaying was done with Koch money. The video is centered around New York, but many of the statistics and issues still apply to cities and metro areas around the country.

All over, public transit funding is often pushed aside and voted down in favor of road and highway funding. However, according to the American Public Transportation Association (APTA), for every dollar we spend in transit, we could see a return of four dollars over the next twenty years. One piece of research in particular stuck out to me. According to a study on social mobility from Harvard, the length of the commute was a greater factor of getting out of poverty than anything else, stronger than crime or measures of area school success. Better access to public transportation led to greater social mobility.

It immediately made sense to me. For so many people, your opportunities and even life expectancy are defined by where you live. Once you have greater mobility, you are not immediately defined by your zip code. If there aren’t job opportunities within walking distance, but you can find a job in a different part of the city that’s accessible, it is no longer out of your reach.

From a personal perspective, I have to plan everything by whether it’s accessible by bus and/or walking. Before I take a job opportunity seriously, I consider the trip there and whether it’s realistic. I have to consider whether an employer is willing to take a chance on me because I don’t have what they consider to be “reliable transportation.” I picked my apartment partially because the location meant I was right by two well-connected routes. But it’s not perfect. Only one route in the city runs past 7 at night, and the stop is two miles away. This means I can’t take jobs that require me to close at night unless they are within walking distance, because that would mean either getting a rideshare back to my place or asking for a ride until I could afford a car.

For many people in a similar position, having a car equals power. It equals freedom. But we know this isn’t sustainable. We have to make changes to our current model so that we can support the environment and cut down on carbon emissions. You shouldn’t have to have a car and potentially increase your impact on the environment or increase your likelihood of an accident just to be an empowered person in this society.

From a social justice perspective, accessible public transportation means people historically at a disadvantage gain freedom and independence. People of color often use public transit more than other populations, yet can often be stuck in areas where the system doesn’t adequately reach them. This unequal distribution and lack of access makes it even harder for people of color to leave areas affected by de facto segregation.

Public transit is also a way that those with mobility issues or older folks can remain independent. Immigrants and refugees also rely on public transportation, since they’re often used to using it in their home country.

When we fight for a robust transportation system, we’re making material differences in the lives of working parents, young families, poor people, disabled people, immigrants, and people of color. You can see working-class solidarity all around you, and see accessibility in a whole new light.

How Can You Help?