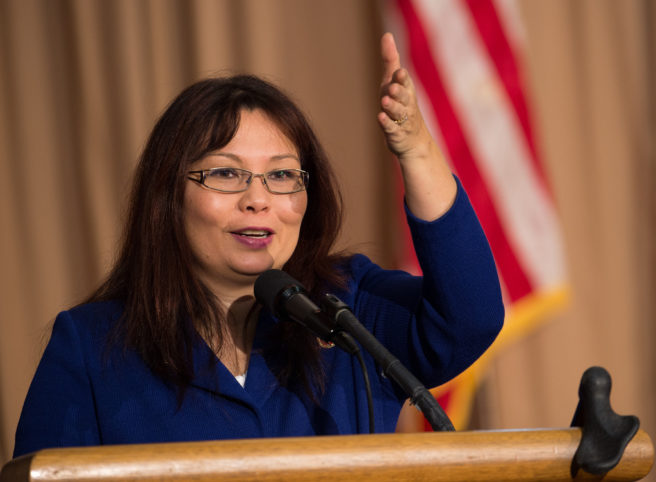 On Monday, Senator Tammy Duckworth became the first senator to give birth while in office. She will be taking parental leave, but Senate protocol could keep her from being able to vote on legislation during that time. And she faces another problem upon returning to the Senate—no children are allowed on the Senate floor.

“You’re not allowed to bring children onto the floor of the Senate at all, so if I have to vote and I’m breastfeeding my child, what do I do, leave her sitting outside?” said Duckworth in Politico’s Women Rule podcast back in February.

On Feb. 5, she also penned an op-ed for CNN calling attention to the need for not only parental leave, but more accessible childcare options and paid sick leave for working Americans. “When people are forced to drop out of the workforce to take care of their children, our economy loses some of our best and brightest workers,” Duckworth wrote, “and those workers lose out on a paycheck and any wage increases or promotions that might have come down the line.”

Proper parental leave, sick leave, and access to daytime childcare is not only an economic issue to be resolved, but it intersects with reproductive justice. If we advocate for birth control, abortion care, and proper sex education to uphold our rights to our bodies, we should also be advocating for paid leave and affordable child care as well.

A tenet of reproductive justice is choosing when and if to have children—and when people do have or expect to have a child, their right to take time off from work to care for their child—postpartum or in the event of illness—should be protected.

Of course, some companies offer paid parental leave for their employees, but for those who do not have access to that, this often means parents have to return to work sooner than they would like because they need that income. For women seeking parental leave after giving birth, this is even more critical — on top of caring for an infant, their bodies are recovering from a major medical event. Rest and recovery is crucial before returning to work.

The issue of paid sick leave should also be addressed. Sick leave is important in terms of reproductive justice (e.g. staying home to care for a sick child), but it also contributes to public health and safety. From working in the food industry, I can tell you that I have seen many people continue working as cooks and waiters even when they may have a contagious cold because they can’t afford to miss a shift. Better laws mandating paid sick leave are critical because people should not be forced to sacrifice their health, or put the health of others at risk, for the sake of solely economic ends.

When we consider reproductive justice, keep child care, paternal leave, and paid sick leave in mind. While I won’t be seeking parental leave anytime soon, it’s an issue that may someday affect us (or, for some, it is a current issue to face). Reproductive justice goes beyond preventing unintended pregnancies and having body autonomy; it also encompasses the choice to parent and the opportunity to care for our children.

Congratulations to Senator Duckworth and her family. Hopefully change will come fast enough to allow voting during parental leave and children on the Senate floor for Duckworth and more Congresswomen to come.