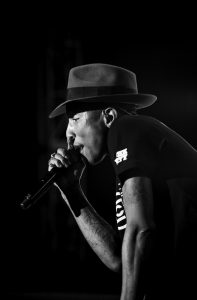 Last year Pharrell Williams added fashion to his cache of talents.  Having done many stints in fashion such as collaborating with Louis Vuitton on eyewear and jewelry, Pharrell was already a trend setter. The music producer and fashion mogul collaborated last year with G-Star, a denim label, to create a line called Raw from The Oceans. This was Pharrell’s line that was made from recycled ocean plastic. The idea is so Pharrell: genius, creative, and has a strong impact. Not only did he collaborate with them, he’s now co-owner of the denim label. When talking to Vogue magazine, Pharrell expressed how happy he was to be on board; “G-Star is an independently minded and forward-thinking company,” said Williams. “I believe they will be the definitive jeans brand of the 21st century. I am looking forward to be part of that mission and to co-create G-Star’s future.”

The website has all of the clothes from the collection created by Pharrell. The clothes have presented a powerful message. When I went onto the website I saw that there were not only well made jeans -priced at over 200 dollars- there were t-shirts that had the phrase “ WTF are you doing to my oceans,” printed on them. This was interesting to me to find that not only were the denims made from recycled ocean plastic, but the clothes also came with a powerful message.
Not only is there a clothing line devoted to the plastic taken from the ocean, there is also an app, containing a game called “Battle for Big Blue” that features include going level to level collecting plastic bottles from the ocean. If you get to a certain level having collected so many plastic bottles, then you get to play Pharrell himself. This was an exciting way to get knowledge to the people about the oceans. There is so much pollution in the water that we don’t pay attention to, and Pharrell and G-star teamed up to make the problem known. According to Vogue, the chief marketing officer of G-Star, Thecla Schaeffer, had this to say about the partnership; “In working with Pharrell Williams we wish to continue to innovate by allowing him to push the boundaries even further across all aspects of our business from creating new product ideas and new visions on sustainability to creating new brand experiences…We’re genuinely excited to welcome Pharrell into the G-Star mission in order to re-imagine the future of denim together.” I know what you’re thinking: Where can I buy and support? Well you can’t, the line launched last spring and Pharrell has since launched a new Fall line for this year.
The unnerving thought for me is that all of this happened and I didn’t hear a peep about it. We plaster our celebrities on the cover of magazines when they get older and are deemed unattractive, or have an emotional breakdown. But unless it’s done with pomp and circumstance we see very little publicity for their good deeds. I think it’s important that celebrities speak out against issues they’re passionate about, and even if it isn’t a hot topic like Black Lives Matter, or gun control it should still go noted.
This year Amber rose did her second annual Slut Walk to raise awareness about the dangers of respectable politics and all I saw was a few memes go around about her boyfriend 21 Savage at the event. As the audience and supporters of our favorite stars and singers, we have to make sure we care just as much about how they fight for their beliefs, as we do about their personal lives.
Picture via Flickr