Pro-Choice: A Mindset Beyond Reproductive Rights 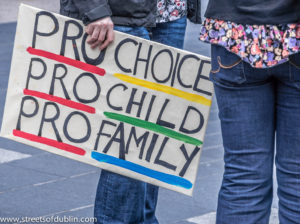 As I have progressed through my life so far, I have learned that my mindset heavily influences how I perceive other people and the world around me. This is not so much in a good mood/bad mood sense, but how I measure other people’s actions in relation to the law and morality.

As a pro-choice woman, I have learned how I distance myself from reproductive issues and decisions by not asking, “What would I do in this situation? What would I choose?” Adopting a pro-choice mindset when it comes to abortion and reproductive rights gives me a greater perspective, realizing that every person makes different decisions regarding their reproductive health for their own unique reasons. Unless I am asked for guidance, the only decisions I should measure and take part in are my own.

On the topic of abortion, many people see it as a very personal issue. I have considered whether or not I would consider abortion if I happened to have an unintended pregnancy. I have never had to make that decision, but if someday I do have to, I know that whatever I desire to do, I want to have every option available to me. And that does include abortion.

This is the pro-choice logic that I have adopted not only for reproductive circumstances, but for all decisions and actions in life. I am okay with whatever you decide to do — within the constraints of just law and general morality — as long is it is not harming others, and you should have the right and the opportunity to pursue what you want to pursue.

The pro-choice mindset can go beyond reproductive rights and into all facets of our daily lives and interactions with others.

An example: veganism and vegetarianism. I was raised in an agriculturally-focused community, and I understand the value of providing meat products to the community. On most days, I eat meat. However, I understand that other people do not consume meat (or any animal products whatsoever) for a variety of reasons. As long as I do not force my worldview on them and they do not try to coerce me into not eating meat, this recognition of differing practices can be respected and tolerated.

In short, eat what you want to eat. You do you.

Same goes for religion. I am not particularly religious, but several people close to me are. I respect that their spirituality is an important part of their lives, and they recognize that it’s not a big deal for me. We have all made our respective choices concerning our religious views.

Pro-choice logic is all about exercising your freedoms and letting other people do that too without judgement, even if they are making conscious decisions that you would never make.

Thinking with a pro-choice perspective is a great way to approach law and justice as well. Recently, Kansas State University president Richard Myers announced that early this summer, our campus will officially become smoke-free. I disagree with his decision on the grounds that it is not pro-choice.

Now, I believe tobacco use is extremely harmful for your body, and I would dissuade anyone who wanted to take up smoking or chewing tobacco from doing so. However, choosing to smoke or not is a personal decision, and any adult who chooses to smoke should be able to. It is not the choice I would make, but that is beside the point.

Myers’ rule would also disproportionately affect facilities staff because they would have to leave their job for a longer period of time to smoke. Additionally, many Chinese students smoke, so they would also have to leave campus between classes and activities just to smoke. And while an option here would be to quit smoking, we must realize that one: quitting tobacco is much harder than cutting sugar or caffeine , and two: a person may not want to quit their tobacco use.

With a pro-choice philosophy, it is easier to measure the justice in certain situations. It also comes with a recognition that poverty and a lack of access to services and products inhibits a person’s ability to choose. Unjust laws hinder people’s freedoms as well.

Within the realm of reproductive justice and outside it, a pro-choice mindset is essential for evaluating the complexities of human nature. Sometimes, we don’t know why people make the decisions they do. But, as long as their decision is not destructive, it should be respected. (Plus, it’s just nicer not worrying about what other people do all the time.)

Tags: decision, mindset, prochoice, you do you