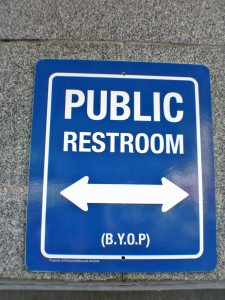 By Eric Richardson from Los Angeles (Flickr) via Wikimedia Commons

A couple weeks ago, something truly awful happened in Florida. State Representative Frank Artiles filed a bill, HB 583, that “requires that use of single-sex facilities be restricted to persons of sex for which facility is designed.”

Basically, the bill targets transgender individuals and is meant to stop them from using the bathroom that corresponds with their gender identity. Under the bill, a transgender man would have to use the women’s bathroom—something which can be both dangerous physically and mentally.

BuzzFeed spoke with Artiles, who said that, “People are not forced to go to the restroom. They choose to go to the restroom.” Which is about as stupid as saying, “People are not forced to breathe air. They choose to breathe air.” For example, if you have an eight-hour work shift, you’ll probably have to use a public restroom at least once.

Artiles said he filed the bill on the grounds of public safety. It’s meant to stop predators, specifically male, who “prowl” ladies’ restrooms. Whether that has a sliver of truth, the bill effectively discriminates against transgender individuals and perpetuates dangerous and hurtful stereotypes about them.

This bill will allow people to police their peers for what they think a typical gender expression should look like. I don’t quite understand how the bill is meant to be enforced either. Violators are punishable by up to a year in jail, but is there going to be a Bathroom Police enforcing the bill? No, so the government will rely on the harsh scrutiny of the public.

The BuzzFeed article points out some other flaws in the bill. If it passes, parents would not be able to bring their kids into bathrooms with them. And transgender men—so, people who are actually men—would be using women’s bathrooms.

It seems that this bill is very indicative that Artiles has never really thought about the struggle of the transgender community. In a quote from BuzzFeed, he deploys the ignorant mentality that many have: “While I understand there are transgender people who want to use bathrooms however they want to feel, that is irrelevant to me.” He also very maturely referred to genitals as “plumbing”—if you’re going to file a bill about something, at least call it by the correct name.

This bill comes at a hard time for transgender individuals in our society. The sixth trans woman of color was just killed this year. Transgender people face discrimination and harassment in the workplace and at school. Unemployment rates among the transgender community are almost doubled, and rates of attempted suicide are higher.

The climate for the transgender community is already so poor—a bill that prevents them from performing a basic bodily function is not just unnecessary, it’s ignorant and offensive.

If you want to take action, here are some things you can do: Sign this petition (created by one of my peers!). Contact your state representative, or Frank Artiles directly. Attend a protest or lobby day.

Additionally, you can work within your community to end the discrimination against transgender people. Call someone out when they make a transphobic remark. Be accepting of different gender identities and expressions. If you see someone in the bathroom, let them be—everyone has to use the restroom and how would you feel if someone stopped you? Hate breeds hate, which is what caused this bill in the first place.

The real kicker to this is that when BuzzFeed asked Artiles if a transgender woman is a women, he responded, “I am not going to get into that. I have not spent much time thinking about that.”

He doesn’t have the time to think about the struggle that transgender individuals face daily, but he does have the time to draft a bill that will make their lives harder? If Artiles wants to stop people from using public restrooms, he should have to go without them as well—then we’ll see how much of a “choice” using the restroom is.