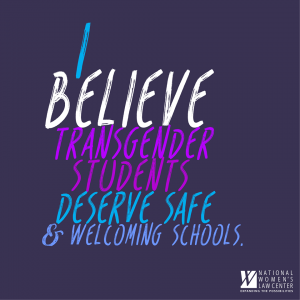 Yall’s president decided to rescind protections for transgender students that allowed them to use restrooms corresponding to their gender identity setting the tone for how his administration is going to handle LGBTQIA issues over the next four years.

As organizers, activists, and advocates, we knew on November 8th that the next four years was going to be filled with actions and protests to protect the constitutional rights of traditionally oppressed and marginalized communities that are being threatened. From interrupting confirmation hearings, nationwide marches, and holding elected representatives accountable at townhalls (when they actually show up), we have been vocalizing our distaste and concern of a discriminatory agenda from the White House.  This agenda’s next target is the trans community, and we have to prepare ourselves to stand against this.

The first step to fighting injustice is being aware of your privileges! As a cisgender woman, I am going to stay in my lane while supporting and uplifting trans voices to ensure their message is heard and activist efforts are centered around them.

The second step is education! Even as an activist, I’ve found myself unaware of the issues affecting trans communities in social justice spaces, so I know how important it is to educate yourself; don’t rely on your trans friends to provide the information you’ll need to be an advocate because it is not their job. I started by reading Janet Mock’s book, Redefining Realness: My Path to Womanhood, Identity, Love & So Much More, and talking with trans activists in my community.

The third step is advocacy! Contact and schedule meetings with your school administrators and staff to present a non-discriminatory policy that ensures trans students are protected.

The fourth step is funding! Research before you donate, but support local, state, and national organizations that are fighting for trans communities. We can’t do the work on the ground without the resources to do so. It’s exciting to see everyday people–who don’t necessarily move in activist spaces very often–put their money where their mouths are.

The fifth step is probably the most important. Check up on your trans friends and family. Reach out to the people you love and let them know that they are not alone in this fight and support them the best way you can.