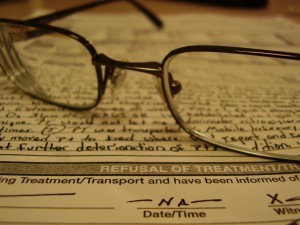 One of the greatest achievements of the reproductive justice movement is the considerable work that has been done to weave the injustices faced by poor women seeking an abortion and the police violence that black folks face together into a coherent critique of structural violence. Recognizing that marginalized communities must stand together when calling for the right to live a life free of violence and full of love is powerful.

Despite this far-reaching agenda, considerable silence still surrounds our final phase of life. If the goal of the reproductive justice movement is life on our own terms, then we need to embrace the uncomfortable truth that death will always lurk on the other side. This means that the reproductive justice community must engage with the grim reality that just as people should live on their own terms, they should die that way, too.

The End of Life Option Act, signed into law by California’s Governor, Jerry Brown, went into effect in January 2016 as a response to the plight of patients whose terminal diagnoses meant final days marred by pain and suffering. The law allows patients to administer their own lethal drug after two doctors confirm their multiple verbal and written requests to end their life.

Respecting the bodily autonomy of those who face terminal illness is important, and the End of Life Option Act does that. But, it doesn’t go far enough.

Just as we recognize that the right to have an abortion is almost meaningless without ensuring access to universal, comprehensive family planning programs, dedication to end of life treatment cannot end at the pharmacy. Laws that provide patients the means to end their lives should also ensure  access to quality health care regardless of income. Doing so would not only improve people’s lives, it would make sure that they can access palliative care, which works to maximize patients’ comfort if the time comes.

But even in a world with equal access to end of life care, “right to die” laws would still have ableist consequences. In states like Oregon which already has “right to die” laws in effect, many people request death because they feel a “lack of dignity, control, and independence”. As feminist disability activists have pointed out, these feelings stem from society’s valuation of “independence” at the expense of the experiences of disabled folks. Truly respecting the right to die necessitates a cultural shift away from the notion that anyone should want to be, or can ever truly be, “independent”. Making visible our own interdependence and valuing community has to be at the forefront of both the right to die and reproductive justice movement.

Creating a future that removes barriers and cultivates support for a diversity of experiences must include a meaningful dedication to the end of life. We know that our most intimate decisions will always be politicized  so the reproductive justice community should take up this mantle in order to ensure community-based solutions to this deeply personal, collective problem.