Reproductive Rights Are Human Rights Is Not Just a Slogan

To anyone that believes that Trump’s presidency isn’t causing any real harm, I’m afraid to tell you that you are terribly mistaken. The State Department recently released their annual human rights report, and the section on reproductive rights has been removed. A section that previously included an outline on access to abortion and contraception and detailed maternal mortality rates has been replaced with a section discussing “coercion in population control” which documents involuntary or “unethical” sterilization. This, along with new sections solidifying America’s compliance with countries with governments known to violate human rights, exemplify what the Trump presidency prioritizes and what it always has.

It’s this ignorance about the importance of reproductive rights and human rights that made it possible for Trump to even be elected in the first place. His campaign ran on the idea that focusing too much on human rights was a “liberal snowflake” idea that had made the Obama administration such a “failure”. Personally, I remember the arguments people had defending Trump in the 2016 election revolved upon the idea that even though what he was saying about Mexican people and Muslims and every other marginalized group he could think of was terrible, he had some reasonable economic policies that could shape this country. Now, disregarding whether there’s any truth behind that statement, the message that idea was sending was very clear. The perils of marginalized groups are bad, but they’re not that big of a deal. Look at the budget cuts Trump’s made in his presidency–increasing the military budget and nearly devitalizing the budgets on education and healthcare.

Reproductive rights, as I hope most of us know, does not simply mean abortion rights. It does guarantee the right to an abortion. It also guarantees the right to a safe pregnancy. If the government truly understood this, crisis pregnancy centers would not be a thing. Abortions can save mothers’ lives. Birth control can alleviate menstrual cramps or endometriosis. Contraception has many uses not limited to allowing people to have a comfortable sex life, although that is a legitimate reason that should not be diminished. It should not have to be a life-or-death situation for reproductive rights to be taken seriously.

The reality is that none of these actions from the government are surprising. This is exactly what was expected to come out of a Trump presidency, and my only hope is that young people are starting to take a noticeable stance in politics and will come out to vote people into office who take human rights–all human rights–as seriously as they need to. ‘Reproductive rights are human rights’ is not simply a slogan on a sign and should be given the significance it deserves and that so many people need. 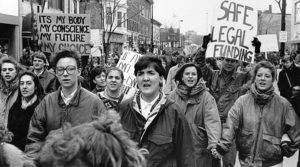