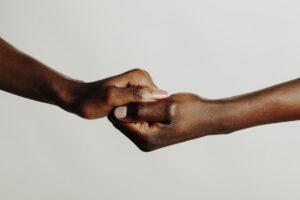 If you were to ask me a month ago what the most fundamental aspect of relationship building is, I would’ve said relatability- aside from intentionality. Relatability helps us build connection and understanding within our interpersonal relationships, in a hyper-individualistic and capitalistic world that leads many of us to believe that our struggles are solely our own to bare. Sometimes, in moments of distress or uncertainty, simply hearing “I can relate to that because…” can move us to be more open and transparent about our struggles. As someone who has endured a great deal of hardship, trauma, and calamity, I find myself connecting with people through those shared experiences often. To me, relatability has always been synonymous with comfort. By being relatable, I believed I was doing a fine job at making others feel comforted and cared for.  You may do it, or you know someone who does. I certainly do.

We’ve all have a moment in time when we’re introduced to a completely new idea that forces us to question everything we thought we knew and practiced prior. For me, the moment that caused me to question the full effectiveness of relatability, was a transformative justice workshop titled “Sharing Resonance”.

Within mere moments of being introduced to the idea, resonance shifted from a physics phenomenon related to sound, to a revolutionary idea and practice that I’ve now incorporated into my life. “Resonance is a gift to the storyteller, it allows us to humanize them and their experiences,” as explained by one of the presenters of the training. Many of us learn best by knowing what things are. I was able to have a more full and complete understanding of what resonance was through addressing what its not, given the following: telling your own story after someone shares their own, finding “meaning”in someone else’s story, asking questions about someone’s story, offering unsolicited advice, opinions, or judgement, maximizing one’s struggles through one downing, nor is it minimizing anyone’s experience through one upping.

We practiced sharing a moment of resonance by listening to the life testimony of a fellow group member. Uninterrupted, they shared their story stemming all the way from childhood to present day. After they were finished, we each individually shared which aspects of the story we resonated with and said nothing more. The act of sharing resonance is one of much patience and intention. In the aftermath of this training, I thought back to the many times where I attempted to bridge connection through sheer relatability and the many times it was done to me. I came to the conclusion that sometimes what we think is soothing and comforting, is really invalidating and unhelpful. When you are telling someone about a happening that was bothersome, you may not always want to share a moment of relatability with those who are listening. Sometimes you just want someone to listen. In many moments after this training I found myself in the midst of conversations in which my initial response could’ve almost always been “I can relate with that because of xyz….” with friends, family, and colleagues alike. One particular moment occurred as I was speaking to a friend about the strained relationship they had with their mother. I, too, have a strained relationship with my mother and was able to make correlations with the same sentiments my friend expressed around abandonment, neglect, and abuse. Instead of interjecting or saying “I feel you because that also happened to me”, I waited until they were finished and told them the parts in the story where I resonated with them. While it is true that words have power, at times less is more.

While the art of sharing resonance is not a necessarily “new” concept, I can’t help but wonder just how much transformation would take place if we implemented it in our day to day lives and engaged with it more often. In the context of its healing power, I find it to be an immensely radical and revolutionary practice. I’ve began to wonder what our conversations and interactions would look like had we viewed resonance in the same light as food, shelter, clothing, accessibility to healthcare, etc. What would our conversations look like if we put power in the hands of storytellers and no longer sought the need to center ourselves in the conversations that involve others? On the extenuating list of things that I believe to be fundamental human rights, I now view resonance as one of them. When all is said and done, we all deserve to be uplifted and to have a sense of belonging (unless you’re a white supremacist or uphold oppressive beliefs/ideals…then this doesn’t apply).