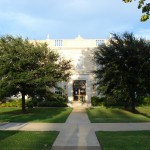 Since my acceptance into graduate schools, I’ve been vocalizing my excitement about moving out of the South and into a liberal metropolitan area (which are still problematic and implicit in racial and economic segregationist practices), where I’ll be in community with like-minded individuals and not be seen as the odd person out because I believe in gender neutral restrooms. Which, if you are from the South or spend time here, you know exactly what I’m talking about. While daydreaming of being in queer women of color-dominated spaces and not constantly having to fight individuals and committees about equality and equity for traditionally oppressed groups, I was brought back to reality with one question. Who is going to fight for vulnerable communities if everyone leaves? My social work professor has been… Read more »

It’s that time of year – when college campuses and communities host The Vagina Monologues. This is the third year I have been involved with my Choice USA chapter’s production of The Vagina Monologues.  The Vagina Monologues is the play written by Eve Ensler, inspired by interviews with over 200 women about anatomy, sexual violence and intimate partner abuse, sex work, birth, and other issues among women*. Unlike other years, I am feeling more and more conflicted about my chapter’s involvement with the play and V-Day. This scathing and incredibly poignant critique of the play has still stuck with me the last few weeks. Basically, Eve Ensler’s cissexist, white feminist point of view has been inadequate for feminists everywhere. This is something my chapter members and I have discussed extensively… Read more »

Students on college campuses around the country are preparing for finals which means lots of caffeine, minimal amounts of sleep, and long nights at the school library. Drowning in finals myself, I sometimes don’t leave the 24-hour school library until late at night. Walking back to my car in pitch darkness and half awake, I walk past a myriad of other sleep-deprived students who all have to walk almost a mile or more back to their apartments. What seems like a typical college finals night for many university students might be a dangerous venture back home. The University of Texas, spans over five blocks each way with over 50,000 students in attendance. With such a huge campus, it’s easy for students to end up walking a huge distance, often times… Read more »

A New Top Priority for College Campuses: Why Your College Needs to Advocate for Survivors

This weekend, my college lost an important part of our community with the passing of our Dean of Students, Bekki Lee.  Bekki was a kind and compassionate listener and activist and the epitome of an advocate for students.  As I sat down to brainstorm for my ChoiceWords post this week I couldn’t bring myself to leave her out.  This week’s post is in honor of Bekki Lee and the vital support she provided which enabled my peers to found the Scripps College Advocates for Survivors of Sexual Assault and her work to help end the proliferation of sexual violence that is too common on residential college campuses.