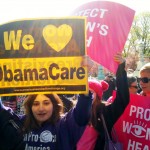 Last week was historical for the transgender community. In the span of five days we saw the U.S. Government sue North Carolina over their discriminatory bathroom bill, HB 2, arguing that it violates federal law; we watched the U.S. Attorney General, Loretta Lynch, deliver a powerful public speech on transgender rights and equality; President Obama directed public schools to allow transgender students to use whichever bathroom fits their gender identity; and, finally, the Department of Health and Human Services (HHS) published a nondiscrimination ruling on the Affordable Care Act (ACA), banning discrimination in the healthcare context based on gender identity or sex. It was a big week. Rounding out the week was the ACA nondiscrimination rule. This ruling deserves additional attention, not only because of the immediate and widespread impact… Read more »