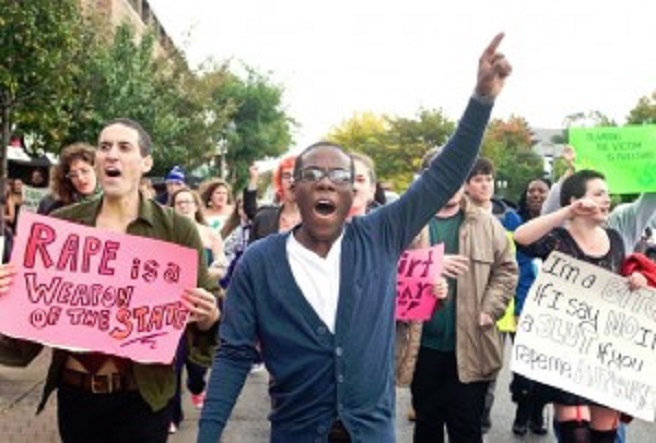 This article was also published in the Claremont Port Side

I have had the honor to write quite a bit about sexual assault and consent during my year as a Choice USA blogger.  I am, unfortunately, quite invested in the issue.  Not only have I had experiences with assault and harassment, I have watched many of my friends and classmates suffer from the effects of assault as well. Chances are, since one in four college-aged women are assaulted, you probably have too.  At the very least, we all, knowingly or unknowingly, know at least one person who has been assaulted.  The implication of this is somewhat frightening.

The prevalence of sexual assault implies that we all, knowingly or unknowingly, know at least one person who has assaulted someone else. Think about it.  Assault is normalized not because a few intrinsically evil men prowl the earth searching for vulnerable victims. Assault is normalized, in part, because too often both perpetrators and victims don’t know how to engage in sex safely, how to give and receive consent, how to say yes and how to recognize no.

I will never forget a conversation I had my sophomore year of college with a good friend of mine, a man who I like and who I trust, who we’ll call James.  We were talking about consent and assault on campus and I started in on the definition of consult. Consent is freely and enthusiastically given, mutually understandable, not given under the influence of drugs or alcohol, not ambiguous is any way, and includes the presence of a yes (not the absence of a no). He looked down for a second and spoke slowly.  “But if that’s assault, then that means that I’ve assaulted someone before.”  He seemed confused and shocked and a bit sad.  So was I.

My friend’s confusion and shock do not excuse his actions and it does not make his assault less real or less “bad.”  But our conversation illuminated for me the fact that there are many men like James out there, who were taught to take what they could get and that if their partner didn’t want something, she was supposed to say no.

This is one of the main reasons I think California Senate Bill 967 is so important. This relatively under the radar piece of legislation would amend California’s Education Code to include both a comprehensive and positive definition of consent and a charge for California community colleges, CSU’s, UC’s, and independent postsecondary institutions that receive public funds for student financial assistance to adopt policies concerning campus sexual violence, domestic violence, dating violence, and stalking. SB 967 would also require these institutions to engage in partnerships with on-campus and community-based organizations in order to provide assistance to victims and implement comprehensive prevention programs on campus which include the updated definition of consent.

Sophia Lopez, Prevention Services Coordinator at Project Sister Family Services, a rape crisis center here in Southern California, urges the importance of verbal consent, on college campuses and beyond.  “Getting more people behind verbal consent is important,” she argues, “because people are waiting for someone to say no and oftentimes people will not say no for many reasons. But they are certainly not saying yes.”

“It is so important that we start to raise more awareness about the issue of sexual violence,” continues Lopez. “We should really be discussing consent, especially at the college level.  The amount of college sexual assault is astounding.  It should be a part of every freshman orientation to talk about sexual violence and consent.”

Aidan J. Lukomnik, a recent graduate from Pitzer College who worked for Men on a Mission, a project through Advocates for Youth to that seeks to engage and mobilize young men on issues related to sexual and reproductive health.  He says that positive verbal consent is important on college campuses specifically because sexual assault is prevalent and yet no one talks about it.

“It is a huge problem,” says Lukomnik, “and we need to make sure we create an environment where individuals can be sexually active, if they want to be, and not scared of having an interaction that they do not want.  With date rape drugs and alcohol prevalent on college campuses making it clear that ‘she didn’t say no’ isn’t a defense will reduce the rates of sexual assaults and help to punish perpetrators of sexual offenses.  It will help create a safer community.”

SB 967 would be a step in the right direction for California.  But when I searched “positive consent bill” on Google, the first result was from a right-wing blog that criticized the bill for “redefining consensual campus sex as rape.”  There should be more campuses organizing around this bill,contacting their Senators, and urging action to get the bill out of the Senate and passed into law.  Reproductive justice advocates in California should be rallying around this legislation.  SB 967 would provide victims of assault on college campuses with more access to support and resources and would educate all students, not just victims but potential perpetrators as well, of the proper and legal definition of consent.

Assault isn’t always perpetrated by maleficent sexual attackers. Sometimes, assault happens because there simply wasn’t enough education available and all parties didn’t know what consent really looked like.  It’s time to change that.  It’s time to address sexual assault as endemic and preventable.  It’s time to let men like my friend James know beforehand what their responsibilities as a partner really are. It’s time to pass SB 967.

For any victims of sexual assault who want support, Sophia Lopez encourages you to call their (Southern California based) hotline number at 909 626 4357.