The Impact of the “Badass” Women’s National Soccer Team

I’ve always found the saying “you play like a girl” one of the most ignorant “insults” someone could use. It’s pointless and the idea women cannot be just as athletic as men is outdated and I can’t believe it’s something we haven’t moved past already.

But this summer, a phenomenal group of women showed the world what playing like a girl really means, and in doing so they became world champions. 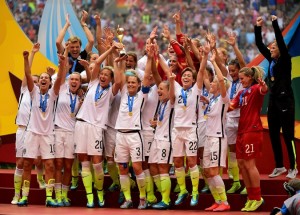 photo via the New York Times

On Tuesday President Obama honored the U.S. Women’s National Team in the White House for winning the World Cup this summer.

There is so much we can learn about inclusivity and athleticism from the example this team sets. I think it’s best summed up when the president said they showed the world playing like a girl means playing like a badass, because it’s true. These are some of the most badass women in America. Not only because they are world champions but because of their diversity and acceptance.

The athletes on the Women’s National Team are important representation for young, female athletes. With all of the world cup coverage they received — the final game was the most watched soccer match in American history, men’s or women’s — young girls were able to see women like them in the media and that representation was huge. There is a lack of media representation for women in sports and it causes young female athletes to feel like they don’t have a space in sports, this team changes that. When young girls are not able to see older athletes to look up to, it causes them to shift away from something they love that’s healthy and teaches them how to be part of a team. This team was able to create a conversation and begin a shift away from that stigma.

This team also allows representation for the LGTBQ community, when Abby Wambach kissed her wife, a union now recognized legally in the U.S., on live TV after winning the World Cup, it was huge. 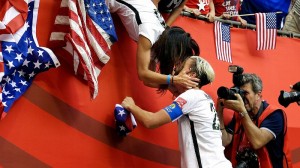 That moment showed the world how powerful love is and how empowering acceptance can be. Once again, this moment goes back to representation. The lack of LGBTQ representation in media is shocking, but Wambach showed members of the LGTBQ community representation is possible and gave them someone to relate to who is beloved by the public.

These women are role models and examples in so many ways for young people, sports are a way to bring people together and these women are able to bring a nation together.

My hope is after this team’s victory and the attention it got, every time a young female athlete is told they play like a girl, they hear “you play like a badass.”