The Invisible Hand of The Patriarchy: Why We Need More Women in Economics 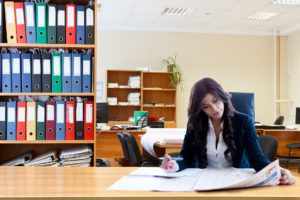 When journalist Maria Bartiromo came to CNBC, she was the first woman to report live from the floor of the New York Stock Exchange. Regardless of her extensive credentials, journalistic ability and a prestigious degree in economics, she was deemed the “money honey”– a somewhat crass way of commodifying her work. Though this is somewhat of a rarefied example, this moniker placed on Bartiromo points to her status as a one-off in a field so vastly dominated by men.

I think about the concept of the “good ole’ boys club” a lot. As I attend a college that restricted women’s admissions until the late 1960s, I consider the words of Virginia Woolf discussing her own fictional university: “I thought how unpleasant it is to be locked out; and I thought how it is worse, perhaps, to be locked in”. With a type of awareness that makes my hair stand on end, it is clear to me that I am accessing a world of education previously inaccessible to women, while also feeling like I am a quiet minority in my field of study. I think about how much space I am allowed to take up as I move in these institutions, both academic and otherwise.

I came to Kenyon College with the intention of solely studying English, a reasonably gender-balanced field, but became enthralled with my first courses in the economics department. And as I travel between English and economics courses, I am aware of the gendered nature of these classrooms. While my campus is an extraordinarily warm place, this old boys club has become pretty apparent to me. In my Macroeconomics class, there are only a handful of women, with a majority of the course being comprised of white men.

Even though the men in my class, including my (surprise) male professor, are entirely open to me and my fellow female peers, it still does feel like I am fighting a game I can’t win. As with many similar professions, careers in economics and business are made by not just of hard work, but also of connections among peers. To speak in sweeping generalizations, if you are in the same fraternity, or on the same lacrosse team, or even just hang out with a group of guys at college, you are significantly more likely to hire said men and help them in their career prospects after schooling. Because women aren’t adequately represented in this field, it sometimes feels like I don’t have the same old boys network that was afforded to others. I worry that I will not have the same ability to utilize connections post-college in the same way my peers will.

As a society, we often speak about the importance of women in STEM fields. While this is, of course, a triumphantly noble cause, it seems that we have forgotten that our ‘dismal science’ is in crisis among gender balance.

We forget how much sway economists have over our everyday lives. All issues come down to their economic core– meaning what outcome is the most efficient– and we must have women putting their two cents in to create a more verdant landscape for all women in global markets. When women are deciding economic policy, we exist in economies that benefit women because women shape them.

Women economists tend to lean towards liberal ideals more often than their male counterparts, too. With their input, we stand a better chance of economic thinkers supporting progressive legislation. Issues like paid sick leave, childcare costs, unpaid labor and otherwise are central to the feminist economists. The women triumphing these economic policies are doing it because they understand the importance of women’s self-determination, and how that begins with financial stability.

With that said, whether it be tax policy, healthcare or otherwise, economic opportunity is reproductive justice, and the best way we can attain the goals we want is to have women deciding them.

The best people to put in place policy that benefits women is other women. When we move economics out of corporations and into the home and daily lives, women are heard, and their work is valued. When we have a framework for women in and out of the workforce created by other women, it is not merely a stab in the dark from men’s extrapolation; it is personal.