The Resistance is Strong (And Wholesome)

I was going to write a scathing piece on the importance of keeping second-trimester abortions accessible. In thinking about my plan of attack for the article, I felt like news and think pieces attacking the current administration are plentiful, but praise is not. As we come up on a year since the election, I thought that I would share some good news and work coming from the people of the resistance. I hope that you, my dear reader, take a few minutes to bask in the magic that is shared bonds over struggle and political opposition. I hope you hug somebody you love and take a moment between reading the news to do something you love. And I hope you appreciate this roundup of good news, by people who are fighting for us all.

Little Angel Babies are writing letters to Donald Trump asking him to be kind.

As a mother of a young son, Molly Spence Sahebjami decided it would be a good practice for him to write a letter to the then president-elect to ask him to be kind to all people. Soon after, she created a Facebook group of parents to do the same. There are many very sweet letters of non-partisan kindness from kids who get it and it brightened my day. 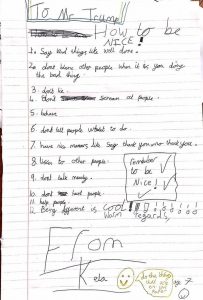 More women are running for office at every level in America than ever before.

In response to Trump’s election, 15,000 women have contacted She Should Run, a non-partisan group dedicated to helping women run for elected office and 20,000 have contacted Emily’s List, a group advocating for pro-choice Democratic women candidates.

Enakshi “Ena” Ganguly exists and is just, like, generally killing the game 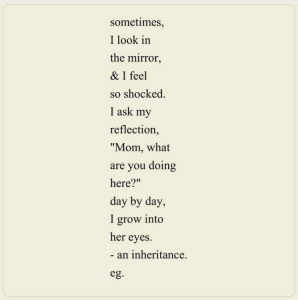 This Bengali-American poet writes about love, brown people, brown women and general woke-ness. She is beautiful and precise in her words, and I think everybody should shower her with affection.

Have you checked out #BlackLove recently?

If the answer is no, sit on your bed, don’t do homework and instead go deep into an Instagram hole and appreciate a very pure hashtag.

Über den Tellerrand https://ueberdentellerrand.org/en/ (which translates roughly to Beyond the Plate) brings together refugees and locals to cook meals from the refugees home countries.  It’s 10/10 pure.