The Science Behind The Copper IUD: How Does Metal Work for Birth Control? 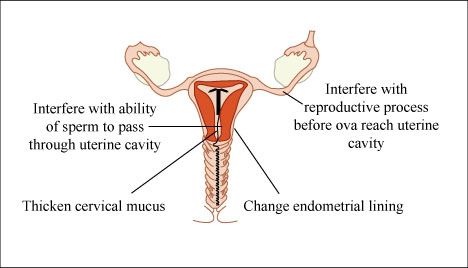 Most forms of birth control, in terms of understanding how they work, are fairly straightforward. Barrier methods like diaphragms and condoms physically prevent sperm from entering the uterus, and hormonal methods like birth control pills, NuvaRings, and Nexplanon administer dosages of hormones that disrupt ovulation.

But there’s an outlier in the BC field: PARAGARD, also known as the copper IUD. It is different from its other T-shaped counterparts because it does not contain any hormones; copper is the contraceptive in this product.

How does copper actually work to prevent pregnancy? Is this method as reliable as its hormone-based peers, like other IUDs and the Nexplanon implant?

In a mechanism of action report by CooperSurgical, the company that makes the copper IUD, the pharmacology behind this birth control method states that “the contraceptive effectiveness of PARAGARD is enhanced by copper continuously released into the uterine cavity.” The IUD primarily prevents sperm from reaching an egg, but the studies cited in the report also say that PARAGARD might also prevent implantation of a zygote, a fertilized egg.

However, we actually don’t know how this technology works, at least on a technical scale. It’s known that the IUD releases copper and, as a result, increases the “copper concentration in the cervical mucus.” Additionally, “high copper concentrations are deleterious to sperm motility.”

But, in the World Health Organization’s guidelines regarding PARAGARD, it is stated that “the exact mechanism of action of copper IUDs is unknown, and it is likely that more than one mechanism may be responsible for the contraceptive effects of copper IUDs.”

There are some leads to follow in order to guess how the copper IUD affects the female reproductive system. Studies have focused on the effects of PARAGARD on sperm and sperm mobility (by changing the makeup of the mucus found in the uterus and fallopian tubes) and also on implantation.

Besides the copper emitted by the IUD, the report states that “the placement of an IUD produces a local foreign-body reaction in the endometrium.” The body responds to the foreign object in the uterus by releasing white blood cells, which alters the fluid within the uterus. This is what may be behind the prevention of implantation.

Though we don’t know precisely how the copper IUD functions, researchers have gathered a good idea of what copper does to prevent pregnancy. CooperSurgical states that in clinical studies, the pregnancy rate for people using PARAGARD is less than one percent, or less than one person for every 100. This level of effectiveness is on par with hormonal IUDs and the Nexplanon arm implant, as there’s little room for human error with these methods.

In a paper published in 1975, Lazar Margulies, M.D., details the history of the IUD up until that year. The first published paper on an IUD, Margulies writes, was published in 1909. The IUD used was made up silkworm gut. Later versions of the IUD in the 1920s included the metals copper, nickel, and zinc after silver was observed to be ineffective and caused gum problems. Early IUD-based contraception utilized metals, and now PARAGARD follows that precedent with its use of copper.

Issues with these early IUDs arose: Margulies writes that after a “second generation” of IUDs hit the market, the FDA ordered a survey after deaths post-IUD insertion were reported. Out of 6,450 answers to the survey, “ten deaths and 15 instances of intestinal obstruction due to the slipping of intestine through the device after perforation were reported.” Ectopic pregnancies within the IUD user group surveyed occurred “about 10 times the normal rate.”

Some of these issues were resolved with redesigning the IUD. Margulies writes that “the breakthrough did come … when Zipper et al. of the Worcester Foundation discovered the inhibitive action of metallic copper and Howard Tatum utilized it as an adjunct to his T-device,” which reduced the rate of pregnancy down to one percent, compared to 18 percent previously.

However, the Guttmacher Institute recorded a drop in IUD usage between 1970 and 2002; about 10 percent of women using birth control used IUDs in 1970, and less than one percent used IUDs in 2002. The issues that arose with earlier IUDs had an impact on usage decades down the road. The institute cites that issues that revolved around the Dalkon Shield, specifically, impacted IUD use, as the Dalkon Shield IUD was associated with an increased risk of pelvic inflammatory disease.

The drop in IUD use between the 70’s and 00’s, the institute found, was mostly an American phenomenon, “in many European countries, IUD use is still an integral component of family planning.”

IUD use is on the upswing now—another study published in 2015 by the Guttmacher Institute found that among contraceptive-using females between 15-44 years old, 8.5 percent used a long-acting reversible contraceptive (LARC) method in 2009, and that percentage increased to 11.6 in 2012. LARC methods include hormonal and copper IUDs and the arm implant.

The importance of LARCs

The LARC family—which includes the copper IUD—has many shared benefits between the different options: they are implanted within the body, either the arm or uterus, so human error is significantly less likely to affect the birth control’s efficiency, and they last several years at a time (PARAGARD is viable for 10 years), so they are great methods for people who want to prevent pregnancy for a long time.

One drawback, however, is that these methods cost more money upfront compared to monthly pill prescriptions. Of course, the actual cost of the LARC to the user depends on health insurance coverage, but that cost can keep people from choosing that option. Plus, if the person desires to switch to a different method other than an IUD or implant, that cost can come back as another barrier; despite when a person has their LARC removed, they pay for the whole 2-10 years, not just the few months that it was in their body.

This issue of cost intersects with reproductive justice work. If people cannot afford LARCs because their insurance doesn’t cover birth control or they do not have health insurance, what methods will they rely on? Are those methods less effective, resulting in more unintended pregnancies overall?

I know this issue firsthand: when I wanted to stop using the NuvaRing and try the Nexplanon implant, I was quoted almost $1000 for the product at my campus health provider. My insurance would cover an almost insignificant amount of that cost. Thankfully, I sought the implant at a county health clinic which prices their services based on income—you pay a portion of your services proportionate to how much (or how little) income you receive. They brought that $1000 price tag down to $250 for my implant.

It is important for us to call upon our legislators, who can ensure that birth control is covered under the ACA or any other health insurance system that arises in the future. We must also oppose any pushes by pharmaceutical companies to unnecessarily increase the price of contraceptives so that LARCs like the copper IUD don’t become less accessible to people who need them.

The copper IUD is a unique contraceptive in that it uses a metal to prevent sperm from reaching an egg. It’s unknown how it works specifically, but less than one percent of users become pregnant while using it, a usage rate on par with its hormonal LARC counterparts. It’s a great long-lasting option for people who do not want to use hormonal birth control or cannot use hormonal birth control because of other conditions and medications. The big thing is: though the science behind PARAGARD is cool, we cannot appreciate its benefits if LARCs in general are financially inaccessible to people who want reliable, long-lasting contraception.