Unionizing Workers is Central to the Reproductive Justice Movement 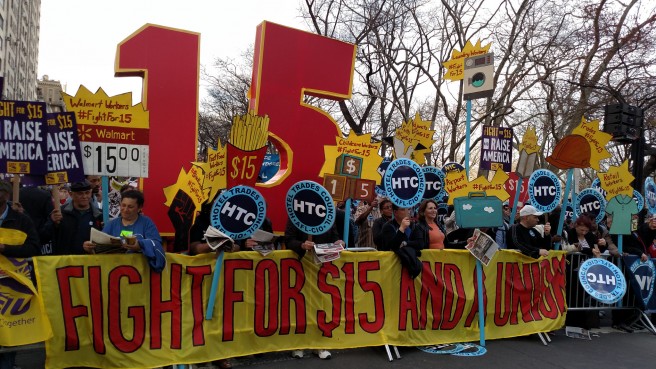 Over the past year the Fight for 15 movement has swelled into a national workers rights movement. Today, a movement that began with fast food workers walking off their jobs, has become a movement for all minimum wage workers and those who stand in solidarity with their struggle. They’re taking to the streets to celebrate minimum wage victories already won and rally in support of a $15 minimum wage everywhere and a union for everyone.

The $15 minimum wage victories have been hard won by the tireless effort and solidarity amongst fast food workers, care workers, and academics alike. Despite intense opposition from businesses and the various institutions that work to protect businesses’ bottom line, workers have managed to win a $15 minimum wage in cities across America and, just recently, the entire state of California.

Their message that all people deserve access to a living wage is inspiring (not just because it ruffles so many businesses feathers) and has resonated with so many across the country.

Those of us in the social justice community have so many reasons to celebrate that fact that these worker’s victories are making national headlines, not least of which because their stories are welcome relief from election coverage about the problems faced by a bunch wealthy elites. While we celebrate, we should also be vigilant about what so often gets lost when the media congratulates politicians who finally buckled under pressure to extend a living wage to their constituents.

The Fight for $15 movement is demanding more than just $15 minimum wage. Their broad-based, coalitional movement recognizes that securing a living wage is just the first step towards creating a more equitable future for all workers. Fight for $15 is also rallying today in order to reaffirm their commitment to unionizing all workers.

Organizing workers into unions, which uses the collective power of workers to bargain for fairer working conditions with their bosses, is an integral step in ensuring the long-term protection of worker’s rights. Beyond securing a livable wage, unionized workers can pool their power and resources in order to make their work environment as safe, equitable, and enjoyable as possible.