WE Get The Job Done

On February 11, 2018, the first female American figure skater in Olympics history nailed one of the most challenging feats in figure skating, the triple axel. Her name is Mirai Nagasu, and this is only one of her many accomplishments. A three-time Four Continents medalist and seven-time US national medalist, Mirai has achieved more at the age of 24 than a lot of Americans could ever dream.

The recent conversation has been centered around her triple axel accomplishment, while her Asian-American heritage did not become relevant until a tweet from a New York Times reporter sparked outrage a day after Mirai’s triple axel. The reporter tweeted a gif of her performing the axel with the words “Immigrants. They get the job done.” A line popularized from a track on Lin-Manuel Miranda’s Hamilton mixtape, the tweet was most likely well-intentioned. Nevertheless, many people were bothered by the statement, particularly because Mirai, the daughter of immigrants, was raised in California. Others wondered why it would be offensive to refer to someone as an immigrant, missing the point entirely. 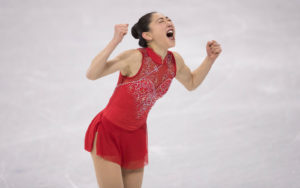 Juxtapose Mirai’s situation with that of Adam Rippon, the first openly gay athlete to compete for the Olympics. The conversation about his success has revolved on his sexuality, and rightly so. Olympians like Gus Kenworthy and Johnny Weir stayed silent about their sexual orientation until after they had competed in the Olympics. Adam, however, is proudly speaking up about his sexuality in relation to his success. He talked about his disapproval of homophobic Vice President Mike Pence, who he would later meet in the opening ceremonies. Adam competing on the world stage as an openly gay man is important and worth mentioning, because it is a momentous part of Olympian history. Can the same be said for Mirai?

Asian-Americans aren’t offended at being called immigrants. It’s the mentality behind statements like that is offensive. Mirai is of Asian heritage, but she is just like any other American girl–her website says she likes Beyonce, cappuccinos, and anything Disney. Yet, she looks like an ‘other’ in so many people’s eyes. For Asian-Americans, it doesn’t matter how many generations of their family have been in America, the way you look will automatically paint us out as an alien. It’s why microaggressions like “where are you really from?” get aggravating. We’re nothing but proud of our heritage and the journey our parents took for us, but we’re made to feel like outsiders while growing up in the same country as everybody else.

Some might argue that what with the president’s recent rhetoric on the topic of immigration, Mirai’s heritage is relevant to the conversation about her success today. This is a valid point, and Mirai hasn’t expressed any offense over the statement from the New York Times reporter. However, the reaction from many Asian-Americans proves that topics like that can still hit a little too close to home. I’m sure Mirai has no problem with being called an immigrant, but the fact that she is the only American Olympian being referred to as such might create an unnecessary feeling of otherness. After all, almost every American is an immigrant, and the reporter specifically said “they” get the job done.