What I Learned from a Year of Celibacy 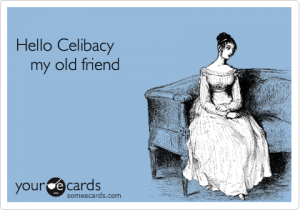 I was never taught to wait until marriage to have sex. My mother encouraged me to wait until I found the right person who I felt safe and secure with, and then I would know that I had found the one. Due to factors out of my control, I was not in control of my first sexual experience but when I found the right person in high school to have sex with, I felt safe and did not regret my decision. After my first time, I became enamored with sex. I thought about sex constantly, I was having sex consistently, and sex had become a part of my identity.

My sexual identity began to change when I began attending a private Christian university in which sex was discouraged and the topic was avoided.  I remember talking with girls in my freshmen residence halls about sex; the majority of them were waiting until marriage, and would ask the minority of girls in the hall who were sexually active about sex. I, along with that minority of girls, would tell stories of our sexual experiences and look upon the girls’ as their faces changed with every intimate detail they heard. I was boastful about being sexually active on campus and could not comprehend why an individual would want to remain celibate.

I held this viewpoint until my junior year, where I had broken up with my sophomore year boyfriend. I returned to campus and felt a lack of sexual attraction towards the students on campus. I blamed the lack of sexual attraction on mourning the loss of a relationship, but months passed and I still felt the same. When I would talk with the same friends from freshman year, my conversations were no longer centered around sex, but on the changes I was experiencing due to my lack of sexual intimacy.

My friends who were sexually active on campus were experiencing repercussions from their sexual intimacy. Due to the size of the university and the lack of maturity of sexual partners in college, people they had been sexual intimate were sharing intimate details about their bodies, sexual preferences and behaviors with individuals on campus. They were being “slut-shamed” for participating in appropriate and sexual behavior which resulted in lack of respect when they were in on-campus leadership positions and isolation from social activities on and off campus. Their identity became associated with sex, and they were too often chastised for it. Yet, they were praised by others for expressing themselves in a sexual fashion. The hypocrisy on campus became centered around the dichotomy of celibacy and having sex.

My campus has created a culture where students are simultaneously praised and chastised for expressing their sexual desire, when they should be creating a culture in which students are open to learning and growing about their sexuality. College is the period of life where individuals experience and sexual growth should not be characterized by secrecy and shame. Students deserve the right to freely express their sexuality; whether that expression includes sex or remaining celibate.

Celibacy gave me a renewed sense of control and appreciation of my body due to my lack of sexual desire. During this self-exploration period, I was reminded of my freshmen year self who prided herself on sexual encounters. (For the record, I do not regret the sexual encounters and partners I had nor shame or condemn individuals for engaging in sex). My freshmen year self shamed individuals for exercising their right to choose to not have sex; not realizing that practicing celibacy was an expression of their sexuality, not lack of one. Sexuality is the sexual habits and desires of a person and if that person decides to not engage, they have the right to do so. I grew a deeper appreciation and knowledge of individuals who express their sexuality in ways different from mine.

I remained celibate throughout my junior year, and I’m choosing to remain celibate during my senior year. Sexuality is a continuous process and needs to be respected and honored at every stage of an individual’s growth and development.

Image via Some Ecards