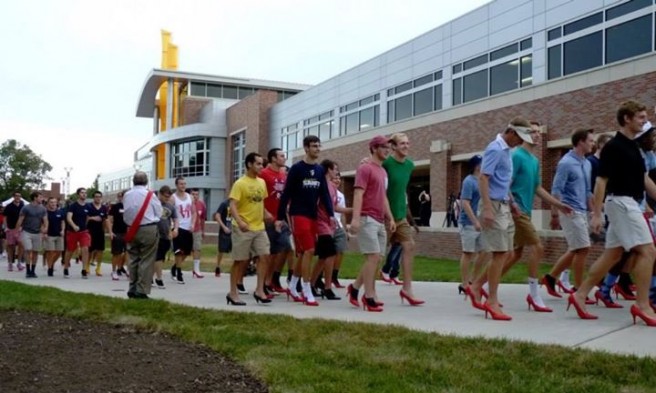 A little over a week ago, the annual “Walk a Mile in Her Shoes” event was put on by the Interfraternity Council (IFC) at Wichita State University. If you’re not familiar with these events, you can read about them here. This year marked the fourth consecutive year I’ve attended this event. The past three years I was a participant in the walk, with considerable support from friends and my wife. Each year I noticed more and more problems with this event in general, as I became more aware and as I engaged in discussions about the event with people much smarter than me.

This year I decided to take on a different role. Our student-led URGE group likes to have a table there, to offer resources and information to those who seek it. We’ve made a point to not be formally involved with the event, because as a group we have problems with the way it is executed. Anyway, I helped run the table this year with another of our members and viewed this event from a spectator’s perspective.

Each year, the event hosts invite a representative from the Wichita Area Sexual Assault Center (WASAC) to speak. This person, a woman, gives statistics about the prevalence of sexual violence in Wichita, and offers resources to those who may need it. Part of the presentation includes a somber discussion of the reality victims of sexual assault face in our society. This can become emotional to some, and can serve as a reminder of why these people are participating.

As an unaffiliated spectator in the back of the group, it became evident how little most of the men lined up to do the march cared about the purpose of the event. Most of the men were talking and laughing with one another, paying absolutely no attention to what the woman from WASAC was trying to say. The noise level was so high that even the few men that seemed interested in the presentation couldn’t hear the speaker.

Even as a person who has no experience with sexual assault, and who has very little experience working with those affected by sexual violence, I was uncomfortable with the tone of the event. It seemed to make sexual violence into a joke, and an excuse for a bunch of frat guys, who are part of the problem, to hang out with their friends. I could only imagine what it would be like as a survivor to attend that event and see how these people see this problem with our society.

As I’ve talked to others about this event, I’ve come up with a short list of what the organizers and participants do that is right and wrong.

Thing they do right #1– This event does raise awareness among college students about the existence of sexual violence, for the few that are not already aware of it. This may be entirely wasted though, since the lighthearted way it is treated contributes more to its normalization than solving the problems.

Thing they do right #2– It gets men involved. That is hard enough to do. Although, to be fair, the event has the effect of being a massive, undeserved pat on the back for the men who participate. Those same men will go back to not having to worry about sexual violence in their everyday lives.

Thing they do right #3– It provides a forum for a group like WASAC to offer their services to a potential group of victims. However, it does this by gathering together a group of people that is statistically very likely to include a large number of perpetrators of sexual violence.

Thing they do wrong #1– I should mention this one more than once! They seem to be promoting the idea that it is possible to understand what a person goes through without living their life. To be entirely honest, walking in high heels has absolutely nothing to do with what it is like to go through life as a woman.

Thing they do wrong #2– They are not being gender inclusive. Yes, women are by far the most likely to be affected by sexual assault, but they are not the only ones. Men can be victims as well, and this event ignores the transgender community entirely.

Thing they do wrong #4– They neglect to mention anything about how fraternities contribute to rape culture. There are countless studies, statistics, and facts that show us that not only is sexual violence more likely to occur in situations where fraternities are involved, but the general attitude of fraternities and their views of women contribute directly to that. If this event is to be put on by fraternities, they should attack the problem at the source: themselves.

Thing they do wrong #5– I’m bringing it up again. Wearing high heels does not help you understand the experience of being a woman. Any event that suggests otherwise is offensive, and also counterproductive. If you tell these men that now they understand what life is like for women, they are even less likely to recognize and fight against the systems of oppression that cause these problems in the first place.

I acknowledge that it is likely most of the people planning and participating in this event have genuinely good intentions. But it is important to recognize the failures of an event like this when we discuss the culture around sexual assault in our society. Even those who profess to care that sexual violence is a huge problem treat it as if it were not a serious issue. And it is serious. It deserves to be treated with the same level of respect that we should have for those affected by this violence.

4 Responses to “What’s right and mostly wrong with “Walk a Mile in Her Shoes.””