White Nationalism Is a Problem Kansas State Needs to Face 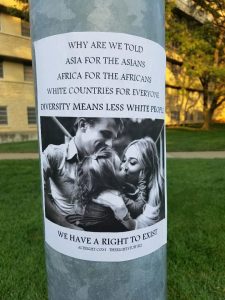 Last Wednesday, Kansas State students woke up to find white nationalist posters put up all across campus. I personally did not see any on my route to class, but plenty of students did, sparking a reaction throughout the university.

From what I saw on social media, there were four different variations of the posters found on campus. The first one that I saw echoed a “White Lives Matter, Too” mentality, stating that “diversity means less white people.” Two others specifically mentioned Muslims and terrorism. The last one featured a picture of a white family, saying “We have a right to exist.”

The amount of hypocrisy these posters portrayed is alarming to me. Of course white people have the right to exist, as all people have the right to exist. But does this country have a historically-rooted, socially acceptable system of discrimination against white people that gives people of color economic and social privileges? No. That said system works in the opposite direction.

There is a growing effort within many universities, K-State included, to promote inclusion, celebrate diversity, and give people with marginalized identities a seat at the table and opportunities to speak. White nationalists see these efforts and believe that empowering marginalized communities means threatening white people. White nationalists represent a group of people who are too reliant on their privileges to sustain their way of life; when that privilege is threatened, they lash out. In the case of the flyers at K-State, they did it anonymously.

The posters were very deliberate with their word usage, not explicitly calling for violence. But one poster stated that 20 percent of Muslims believe acts of terrorism are okay in some cases, according to a ‘Pew poll.’ While someone at our campus newspaper looked into that “20 percent” claim and found it to be incorrect, the call to action on that poster is what caught my eye: “How many is too many?”

This is what made me afraid. I felt scared, not for myself, but for my housemates and my friends who aren’t white. The last thing I would want for the people I love is for them to feel unsafe, or worse, be ostracized or belittled because of their skin color or religious identity.

While a piece of paper itself might seem harmless, the words on it and the sentiment behind it can do a lot of damage. Words inspire action, and in the case of those posters, it can lead people to believe that people of color should not be welcome in the U.S., in Kansas, or on our campus. That’s a viewpoint that we need to speak out against.

And some K-Staters did.

The white nationalist propaganda also inspired action in the form of love. A solidarity rally the next night brought in about 500 people who condemn the alt-right rhetoric that was posted on campus. Many speakers urged the administration to be proactive about this issue. While the university did release a statement stating that the posters were “unwelcome,” I also believe Kansas State should better support people of color, Muslims, queer folks, and other marginalized groups that learn and work at the university. Speeding up the installation of a multicultural center would be nice, for starters.

The hateful and discriminatory nature of white nationalist rhetoric should not be tolerated. It contributes to a system of marginalization already in play in our society. Students, alumni, and especially the administration of Kansas State need to take a stronger stance against discriminatory language. It threatens people who truly are part of the K-State family and makes our campus feel unsafe. This isn’t an issue to be swept under the rug.