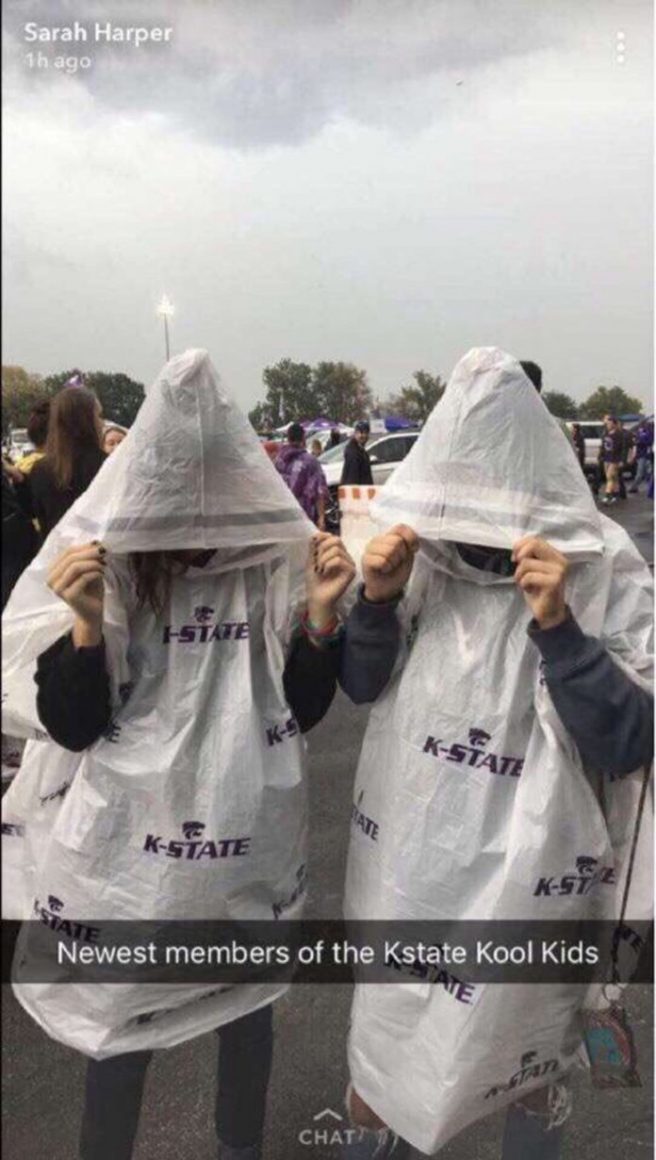 This weekend, a Kansas State student shared a picture on her Snapchat account that rebounded throughout the student body. The picture was taken at our most recent home football game against Texas Christian University, which was delayed three times due to weather. The picture features two other people in white rain ponchos with the hoods up, masking their faces. According to the caption, they are members of the “Kstate [sic] Kool Kids.”

The obvious problem here is that they referenced the KKK. This paints K-State and its students in a bad light, so many people have been upset over it. As it became a big talking point on campus, the Collegian, our campus newspaper, covered the story scrupulously. I am a copy editor for this publication, so I helped check every claim and source provided in the article.

Already the Collegian as gotten a lot of negative attention for it, as some people believe the Snapchat post wasn’t worth covering or that the Collegian reports on too many racial issues.

Hey white people: racist or otherwise discriminatory incidents are worth covering. They might not affect you, but they affect the lives of people in marginalized groups.

Though the student did not mention black people or have any direct reference to people of color in the Snapchat, it’s well-known that the Ku Klux Klan is a domestic terrorist group with the mission of intimidating, demeaning, and supporting violence and discrimination against black people.

So, yes, joking about being involved with the KKK is a serious matter. They lynch people. They burn down houses. And frankly, not only should white people know about these incidents and the repercussions they have on our society, we should be mad about it.

Don’t be mad at the news because it breaks you from your bubble of security and comfort as a white person. Be mad because racially charged jokes do happen, and they do have an impact on people of color. Be mad that marginalized groups of people experience physical and emotional harm at the hands of the privileged.

One facet of privilege is that privileged people often do not see or realize that they have it. This allows white people to not see the effects of certain comments or actions that affect people of color. It’s the mentality of “well, it doesn’t bother me or my friends, so it must not bother anybody else.”

In America, we have historically lived in racially separate communities due to many forces, like redlining and slave ownership. There’s a dynamic of “us” and “them” where our community’s culture is normal, and others are abnormal or just unknown.

I saw this firsthand in my hometown community after the murder of Michael Brown and the following news coverage of other black people across the nation getting shot by police officers.

Many people in my predominantly white, rural county sided more with the police than with victims like Michael Brown. The overall response to the subsequent Black Lives Matter movement focused on what they knew as their reality: blue lives matter, all lives matter.

Part of this is because the relationship between the local police force and the public is healthier in a smaller community. Police officers aren’t just uniforms; they are community members, friends, allies. Also, the local police force matches the public very well in terms of demographics, which is easy considering the population of Rooks County, Kansas, is 95 percent white.

What white people fail to see sometimes is that other people’s experiences might be different — radically different, even. I personally trust and respect the police force in my college town, Manhattan, Kansas. But I also realize I have never been racially profiled. I have never worried about being harmed by a police officer. It never crossed my mind that my rights would be violated if and when I would be pulled over by a police officer. And the fact that some black people rightfully worry about being killed for no reason by the police, stuns and upsets me.

This is what white people should take away from the Snapchat incident. Joking about belonging to a group like the KKK may not be problematic for you or other white people. But for people of color and others who realize the significance of the KKK’s hateful acts on our society, it’s absolutely inappropriate and fails to recognize the negative impact it has on others.

When the media covers incidents pertaining to racism like this, we should not treat it like it’s an inconvenience or not worth knowing about. We need to educate ourselves about the injustices and problems that marginalized groups face and help solve the problem, not ignore it.