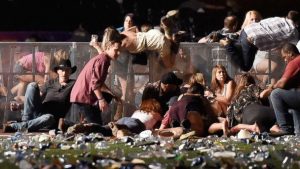 If you’ve paid any attention to the news in the past couple of days, you know of the tragic events that conspired in Las Vegas. The worst part is that this isn’t even news anymore. I’m sure nobody was actually surprised to hear that this is one of the deadliest mass shootings in history, especially considering that most of the deadliest shootings in U.S. history happened in the past ten years. I’m also sure that nobody is surprised to see the media’s mass coverage of the attacker’s history in a despicable attempt to sympathize with him. The people who knew him would never have expected the guy who liked playing poker would decide to shoot and kill over fifty people in one night, so just how could this have happened? Because white privilege hurts everybody in our society and will continue to have lethal consequences if we don’t deal with it.

The best way to juxtapose the media’s bias towards white, domestic terrorists is to compare it with how the media treats terrorists of pretty much any other color. For instance, most media outlets haven’t named the massacre in Las Vegas as a terrorist act but is quick to call any attack perpetrated by a brown person terrorism. When I took my first world history class in middle school, my teacher actually told the class that the first thing that should come to our minds when we think of Islam should be the word terrorist. Being a Muslim myself, I learned this pretty quickly anyway when jokes about my family having bombs at the house became commonplace. When any sort of mass shooting takes place, everyone immediately jumps to the conclusion that it must be a brown person to start the debate about what to do about radical Islamic terrorism. However, when it’s discovered that the attack was from a white man, which it so often is, the entire narrative changes.

Think of how much violence is presented in the media when it’s perpetrated from white men. Shows like Game of Thrones, Breaking Bad as well as movies like The Silence of the Lambs and anything directed by Quentin Tarantino all glorify violence by white men. We watch them commit horrific acts of violence and think nothing of it; if anything, we idolize it. These characters may not be people we like, but we are fascinated by them. Most of all, we don’t forget them.

The rage and anger from these white men that have killed so many people is a direct effect of the normalization of white male violence. To put this blame solely on the media wouldn’t be accurate. I’d say that the old adage “boys will be boys” has some real influence as well. Whether or not mental illness played a part on this specific instance is unclear, but I can say one thing for sure. These white men were angry and felt entitled to hurt others because of it. They’ve seen what happens to other white men when they commit mass shootings, and they don’t even have to look just at the movies: they will be covered in the media extensively, labeled a lone wolf, and, most importantly, be remembered.

Though these white men’s anger fueled these attacks, the guns had the trigger to pull. The fact that stricter gun control laws are not an obvious solution to a very serious problem is very telling of the kind of people we have in Congress today (which also explains the results of last year’s presidential election). I cannot emphasize enough how important it is to vote in your local senatorial elections. We need people who are willing to pass legislation for stricter gun control. We desperately, desperately need it.

I didn’t mention any of the terrorist’s names, because I cannot add to the sickening coverage all over media outlets in the past couple of days. But I do want to remember the too many victims of the tragic Las Vegas massacre as well as the victims of every other horrible massacre that has occurred in this country. These lives did not deserve to be taken by senseless acts of violence. But innocent lives will keep being lost if there is nothing done about gun control. Thoughts are prayers are nice, but they don’t seem to be doing much to help. We must act now!