After Billboard’s Women in Music Awards show made us remember how many powerful women there are in the music industry, I realized the business of music is still run by men.  From CEOs to executives and lawyers, music boasts some amazing female talents whose careers are puppeteered by their counterparts. The ‘assaultgate’ in Hollywood, and allegations surrounding actors, public figures and politicians is overwhelming but I can’t help wonder if it ever seeped into the music industry? The same industry where we sexualize and objectify women to ensure the sale of records has yet to have an explosion of victims come forward, and while I hope there isn’t corruption, pop star Ke$ha’s story tells a different tale.

We all remember the civil suit Ke$ha filed against her producer Dr. Luke, the accusations of defamation of character, gender- based hate crimes, and her speaking out on the sexual assault. Ke$sha was not released from her contract, and the judge threw out all of her claims.

Now, Kesha has a new single “Praying” which is an amazing ballad about healing and finding peace. Although still working under her label, she’s making a way for the voiceless.

The Women in Music Awards show was an amazing night where we celebrated all of the women doing their part in music amidst the tragic stories of womanhood being taken away by men of power. As Grammy season approaches, I want to highlight an artist that I think breaks down barriers, and encourages us all to go against the grain: SZA.

No, this is not a review of SZA’s new album. I want to share some statistics I found and show how CTRL spoke to women and the feminine culture. The atmosphere that music, and other media are creating is surging the growth of business, improving mental health, and overall positivity between women of color.

From Solange, to Kelhani and now SZA, women of color are climbing the charts and becoming Grammy nominated artisits. SZA’s debut album, CTRL, sits alongside some heavy contenders this year. Songs from CTRL like Supermodel and Drew Barrymore made me self reflect. Supermodel characterized everything I felt about dealing with others in a romantic setting. I needed so much attention from them, and not only needing them to notice me; I needed them to see I was an asset so I wouldn’t be alone. Being lonely is a constant fear that SZA talks about throughout the album. Trying to avoid loneliness for me didn’t end well because my relationships would wind up the same- over extending for someone that didn’t reciprocate.
Listening to Drew Barrymore and the ever present lyrics “Lonely enough to let you treat me like this” hit home for me and made me realize: Wow, it gets easier to allow someone to harm you or treat you as less than when you’re worried of being alone.

This album was a reflecting period for me. “The Weekend” really does shine a light on sexuality and how everyone is sharing each other one way or any other. I haven’t de-conditioned myself enough to tell if monogamy is a trick or not.  According to Bentley University’s study on why millennials aren’t getting married. It’s listed that: “Marriage has lost much of its social allure, but remains a desired milestone for about 70 percent of millennials. They say they would like to marry, but many are worried about a necessary prerequisite: a solid economic foundation.” According to the university, millennials are starting to wait until 27 or 29 to get married, compared to the 20 and 23 year-olds of the 1960’s. 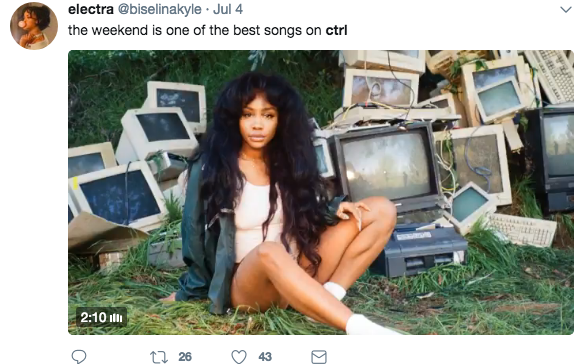 The song “The Weekend” is about a girl saying she assumes the guy she’s dating is talking to other girls, and is okay with that. But in the pre- chorus she states “My man is my man is your man, heard that’s her man too.” So not only does this guy seemingly have a girlfriend, he’s messing with other women in the song, too.

Statistics show that more women are also becoming more interested in breaking new barriers in business and entrepreneurship. Even I want to own my own business. Whether that’s being an image consulting for social media, or my own magazine/ publication (or both) I already have it in my mind, I’ll be a mogul. This is the thought process of many young women of color who are starting their own businesses such as the up and coming skin care line NOLASkinEssentials. The black owned vegan, and cruelty free skin care business runs out of New York. The company has a large following on twitter along with a partnership using various black make up artists.

These 20 somethings that are graduating now have the joy of being thrown to the wolves. I know some that are trying to pull apartments and jobs out of their asses- not because they’re ill prepared- but because things just didn’t go as they planned. Nothing goes to plan, and sometimes the greatest opportunities or moments are ones that are aren’t planned at all.