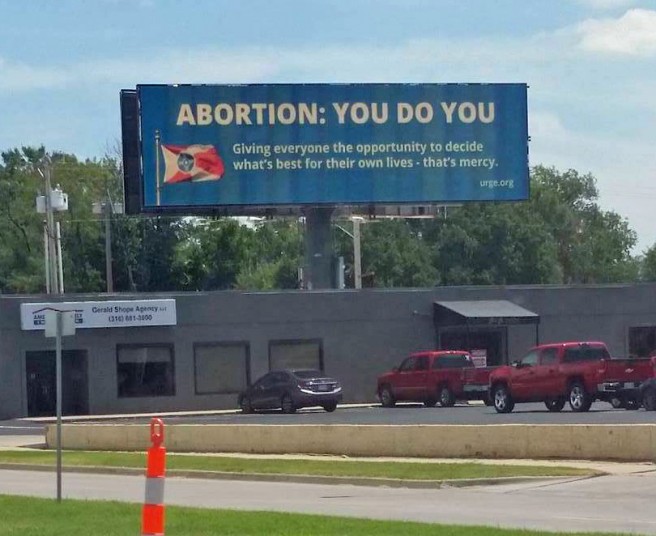 This article originally appeared on the blog at Planned Parenthood Great Plains Votes.

Growing up in a small Kansas town meant a few things for me. I would forever be haunted by Wizard of Oz jokes whenever I told someone I’m from Kansas, going to Sonic with friends would be an early teen right of passage, and any road trip I took with my parents would mean driving past multiple anti-abortion billboards.

These billboards varied in language, size, and quality but they all had the same message: Abortion is bad. As most people know, Kansas is notorious for its negative outlook on abortion. Although much of our state legislature is rabidly anti-choice, the majority of fellow Kansans I know are okay with abortion. One of the reasons I believe Kansas still has a bad rap when it comes to talking about abortion is because of the massive quantity of anti-abortion billboards. Driving through Wichita, just down Kellogg, you will see two or three of these billboards.

When I heard that anti-choice extremists would be descending on Wichita for the 25th anniversary of the Summer of Mercy, I thought maybe we should welcome them to town with a billboard.  The Summer of Mercy was a six week event where thousands of anti-abortion protestors gathered in Wichita to demonstrate at three abortion clinics, primarily targeting Dr. George Tiller’s clinic. They brought with them chaos, aggression, and violence and helped set the tone for Kansas as an anti-abortion state. By having one billboard that is unapologetically pro-abortion in a place like Wichita, 25 years after the Summer of Mercy, Kansans finally have a visual that says abortion is good. Even the challenging process of finding a billboard company in Wichita to advertise an image that says “Abortion: You do You” speaks to how large of an influence these billboards have on the culture in Kansas.

This billboard also occurred at a pivotal moment when Planned Parenthood Great Plains expanded abortion services to their Wichita clinic. Clinics in Wichita like Planned Parenthood Great Plains and Southwind Women’s Center, are providing good and wanted abortion care for Kansans and other folks in surrounding states, but are met with hostility and violence. The 25th anniversary of the Summer of Mercy is a celebration of that hostility and violence, which disgusts and, frankly, scares the living shit out of me.

I’m very fortunate to work for an organization like URGE that allows me to organize for an issue I’m passionate about in a state that I love, and to do it with boldness. But the young people I work with on the ground are the ones who will lead us to an abortion positive Kansas. I am looking forward to seeing a Kansas where everyone has the opportunity to decide what’s best for their lives, where every body and identity is celebrated, and where sexual health is valued. My hope is that this billboard is a drop in the bucket that will create the abortion positive culture shift Kansas desperately needs.

Haley Miller is the Midwest Field Associate, based in Washington, DC. Haley is a native Kansan.