Yes, We Do Need Love, Simon

When I read Simon Vs. The Homosapiens Agenda for the first time, I was not looking for a book about real, political issues. I was simply looking for a fun read, and I got it in this charming romantic comedy about a gay teenager struggling to come out to his family and friends. This Friday, the movie adaptation Love, Simon will be released, and its marketing campaign is filled with funny puns like “He’s done keeping his story straight” and “coming out” used for advertising. The story isn’t groundbreaking or complicated in any way. Rather, it’s an anomaly because it’s a simple gay love story with a happy ending.

An article in Time recently discussed whether this is a movie that today’s generation needs particularly. The author argues that a story about a white male with a liberal family who immediately accepts him is a story that will really resonate with the current generation. After all, gay characters in television and film are becoming part of the norm. Simon’s story doesn’t teach anything new, and it isn’t designed to change people’s minds about homosexuality. But that’s the point.

Stories centering gay people in film have largely been tragic. Last year’s Call Me By Your Name, though a beautifully portrayal of first love, does not end happily for the young lovers. Oscar-winning Moonlight is stunning, though it also does not end with a happy ending for the lovers. Neither did Brokeback Mountain or Carol or several other acclaimed films in gay cinema. A true romantic comedy, simple and positive, for gay people is a rare find. In fact, Love, Simon is the first mainstream teen comedy around a gay character.

It’s true that studios are becoming more comfortable with showing more gay characters on the big screen. But, just remember the big gay moment that was hyped up in last year’s Beauty and the Beast. Although, you probably can’t, because it literally lasts for less than a second and would be unnoticed by anyone who wasn’t looking for it. Strides made in television aside, there’s a reason that films haven’t been progressing at the same speed when it comes to LGBTQ+ representation.

Despite the general belief that young people have become more accepting of gay people, reports show that rates of anti-LGBTQ+ bullying are at an unprecedented high. LGBTQ+ teens are two to three times more likely to be bullied than their peers, making them more susceptible to depression and suicide. An actual Alabama theatre banned Beauty and the Beast over that one gay moment. Homophobia is alive and well.

I can see why seeing a white male in the lead role may not seem particularly groundbreaking to people, and that’s valid. But, think about all the other teen comedies coming out last year, this year, and every year to come with straight white males. Simon may not look special, but he is. This movie may seem like any other teen comedy, and it really is. That’s the point. Think about how wonderful it will be for young gay teens to see a sweet romantic comedy revolving around a gay character. How validating it will make their own feelings, and how it will make them feel like they can have their own love story, too. Simon isn’t trying to preach to you, and that’s why he’s important. Because, the fact of the matter is that we really do need him. It’s about time. 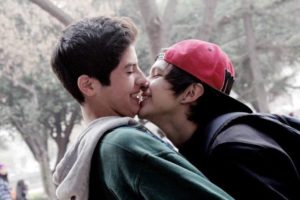