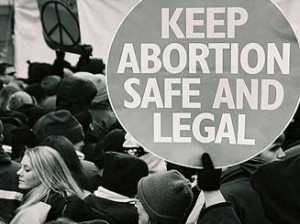 Last week, my school was “lucky” enough to play host to an anti-abortion group called Creating Equal. The group stopped by for two days as part of their annual “justice ride,” in order to spread propaganda and put down the pro-choice movement.

Their argument was based on the fact that abortion is “ageism” and the group showed pictures of “abortions,” as well as a video of what an abortion looks like (on a large screen in the middle of campus, no less).

When students realized what was happening, they formed a counter-protest, complete with safe spaces to help those who were triggered by the images. Arguments over ethics and the pro-choice movement littered Facebook and one counter-protest participant admitted that an anti-abortionist had her talking in circles.

I get it. Talking pro-choice can be hard, especially if you don’t have a fact sheet in front of you or you have trouble thinking on your feet.

Here are some of the more common anti-abortionist arguments that I heard, as well as responses for you to keep in your back pocket:

“If you have sex, you have to be prepared to be responsible for the outcome of your actions.”

Not all people who have sex choose to get pregnant, and even those who do should not be forced to continue a pregnancy. This essentially shames people for enjoying sex and makes it all about reproduction rather than pleasure or connecting with a partner. I would also argue that it is more responsible for a person to have an abortion if they know that they cannot care for or support a child. The American foster and adoption systems are already very full, and there are not necessarily government systems (welfare, universal healthcare, etc.) that might provide for a child. Abortion might very well be the most responsible decision for a person.

“How is it right for someone to decide whether an innocent and defenseless child can live? All humans are created equal.”

An important thing to remember about pregnancy is that fetuses are dependent on the pregnant person’s body in order to stay alive. And because of an idea called bodily autonomy (i.e. the reason that you can’t be forced to donate organs even if it would save a person’s life), we cannot make a person continue a pregnancy when they do not want to. I would also point out that it isn’t right for someone to decide whether a person has to continue a pregnancy that might negatively impact them physically, socially and financially.

“I’m okay with abortion in the case of rape, but that’s it.”

We already know that many people who are raped don’t report it, so this would make it impossible for even people who actually have been assaulted to prove that they are “worthy” of an abortion. Also, lives conceived through rape are fundamentally no different than fetuses conceived otherwise, so this argument destroys the “pro-life” belief of many anti-abortionists.

Specific to the demonstration on campus, someone said: “The pictures were graphic, but that’s the truth about abortion.”

Except it’s not. Surgical abortion is actually one of the safest types of medical procedures. Giving birth incurs 13 times more risk of death than having an abortion. Anti-abortionists choose to show graphic images for shock value. Most often, these photos are of miscarriages, late-term abortions (which do not represent the majority of abortions), or are otherwise Photoshopped. The overwhelming majority of abortions are safe, clean and easy—at least, when they are legal.

This isn’t an argument, but one anti-abortionist did mention this to me: “Conception occurs immediately after having sex.”

This isn’t even remotely scientifically correct. This is also assuming that everyone gets pregnant from penetrative intercourse, while many people might choose to get pregnant through other means, like in vitro fertilization. Still, even referencing penetrative sex, conception can happen multiple days after sexual intercourse. This isn’t necessarily an argument, but it was funny to me and serves as a good reminder that many anti-abortionists use incorrect facts and statistics, fallacies in their arguments, and made-up ideas.

If you do get in an argument where you need to defend reproductive justice, relax. It’s easier to make mistakes and to say rash things when you are worked up, so calm down and articulate your viewpoints clearly. You don’t need to include specific facts to make a point (for example, “legal, surgical abortion is actually a really safe procedure” is just as valid as providing the medical risk statistics).

If you are interested in looking up statistics, or looking up more reproductive justice talking points, I recommend pro-choice research sites. This article also covers more anti-abortion arguments and what you should say in response, as this is certainly not an exhaustive list.

What are your go-to talking points when discussing pro-choice and reproductive justice?