I realized that I was trans when I was 15 and a sophomore in high school. Prior to then, I was mostly occupied with uncovering my sexuality, which was further complicated by my false idea that gender and sexuality are two inextricable elements, rather than two independent–but frequently –intersecting identities. Although I didn’t truly let my trans flag fly until my senior year, I have been open about my identity (in varying degrees) for years, meaning that people around me have had plenty of time to come up with uncreative, stale, and expired microaggressions. Here are 5 hella microaggressive comments/questions to never say/ask to trans people! (and if you say them to me, consider yourself cut off :)) 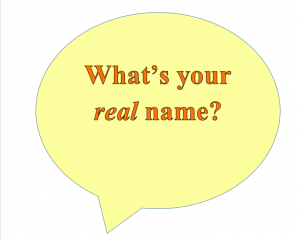 It is important to note that a name change does not validate one’s trans identity. Not every trans person feels a dissonance between their identity and their legal/birth name, and may remain honored by their legal/birth name even upon realizing their trans identity. For me personally, while I have considered a name change, I realized that at least for right now, a name change is not something that would honor me, but rather, something I feel pressured to do because it aligns with a common trans narrative. While this question may appear harmless, it illuminates a particular type of disdain with validating and respecting trans people’s decisions about our names, bodies’ and identities. We do not interrogate married folks with questions about their maiden names or folks with nicknames about what their real name is. This is because we respect their autonomy and ability to make their own decisions, regardless of whether this is validated by documentation. Asking trans folks this question undermines our ability to make our own decisions about what we are called and how we are perceived. It also implies that the name we actually use is fake and participates in cis folks’ obsession with peeling back layers of falsity in order to expose trans folks’ “real identities.” 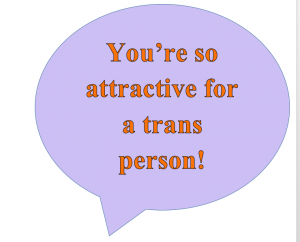 This comment is predicated on the belief that trans people are generally unattractive (which is so untrue, have y’all peeped my picture???) so although it appears complimentary, it actually reinforces the idea that trans people are unattractive/undesirable. By saying someone is attractive for a __________, it qualifies their attractiveness as it relates to their other identities. This comment also assumes that trans folks require cis validation in order to find security in our appearance. The assumption here is that cis folk are experts on trans people’s attractiveness and that we aspire to pass the cis test in order to feel good about ourselves. Rather than validating a trans person’s identity, our ability to seamlessly assimilate into cisnormativity and be read as cis is validated. While being read as cis (also known as “passing”) is desired by some trans/gender non-conforming folk (usually relating to matters of safety, employment, housing, etc.), it is not the end goal for all trans people. Trans people are not valid according to how closely we can emulate cis standards of attractiveness. 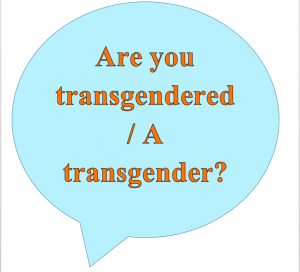 The grammatical aspect of these questions would be mostly irrelevant if it did not perfectly capture the ways that broader societies view trans people. By adding the “-ed” to transgender and making it a verb, it implies that trans people have had something done to them or are actively doing something to themselves. Being trans is not a condition or something that has happened to a person, it is an element of our identities. Seldomly do we use the term “gendered” unless discussing objects (ie: gendered restrooms, gendered language, gendered clothing, etc), so referring to trans people as “transgendered” is dehumanizing. While a person can transition and can have transitioned, a person cannot be transgendered. Using transgender as a noun (ie: a transgender, transgenders) is also similarly dehumanizing. 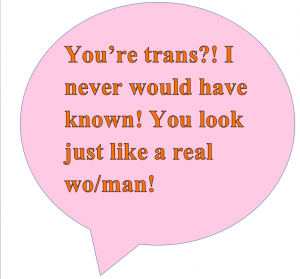 This implies that there is something fake/unreal about trans people’s gender’s and overall identities’. While this may seem harmless, the belief that trans people are tricking/trapping cis people is something that gets us murdered. 21 murders were reported in the first 10 months of 2015, and most victims were trans women of color. These acts of heinous violence are largely under-reported and misreported. This comment highlights cis people’s belief that being trans is something that is highly visible. While some trans people may be visibly trans/gender non-conforming, the reality is that interactions with trans folks happen more frequently than many know. As a result of cisnormativity, cis people are surprised to find that trans people who are read as their gender(s) using cis/heteronormative, white supremacist inflections of gender aren’t actually cis. Ultimately, it puts them at ease to find that a trans person attains cis standards of beauty but can create harmful expectations for other trans folk who are not as seamlessly read as their gender. Trans women are real women. Trans men are real men. Gender non-conforming people are gender-non-conforming, and you’re an asshole. 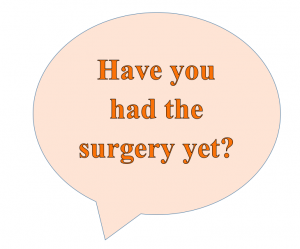 It’s important to note that surgery is not always desirable nor attainable (due to safety, financial stability, pre-existing medical conditions, etc.) for all trans/gender non-conforming folk. This question assumes that surgery is not an if but a when; implying that surgery, and by extension, assimilation, should be prioritized over all other aspects of transition. The inability or refusal to undergo surgery does NOT determine one’s trans identity. Surgeries, among other medical procedures do NOT determine one’s trans identity. While surgeries can be affirming and life-saving for some trans/gender non-conforming folk, it is not a prerequisite to one’s identity. If you ask this question, I’m expecting the funds to afford these surgeries to be transferred to my bank. I prefer direct deposit 🙂

Please, for the love of all that is good, save trans people the burden of your dehumanizing, entitled questions. If ever in doubt about what constitutes an invasive question, consult my favorite free source, Google.com. Trans people aren’t your encyclopedias anyway.