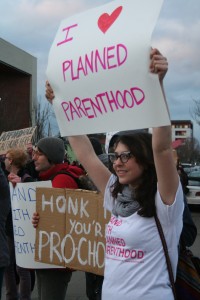 While most of Alabama has spent the past few weeks following the sexual misconduct scandal surrounding Governor Bentley, the Alabama House of Representatives quietly began debating a resolution that would add an amendment to the state constitution claiming that life begins at conception.

The bill was sponsored by Decatur representative, Ed Henry, with five speakers acting on his behalf during the March 23 meeting of the Health Committee, who took no vote on the subject. According to the ACLU, such an amendment could spell the end for all abortion clinics and medications in the state, as well as removing existing exceptions to abortion laws based on rape or incest.

Perhaps the biggest thing working against the law is that many forms of contraception, including birth control products like Plan B, would also become illegal under this bill. The bill would also outlaw embryonic stem cell research in the state, something gaining a great deal of traction in universities across the state.

For the bill to pass, however, it will require a 2/3 majority of the House and Senate as well as direct approval from Alabama voters. So while this may not be a big issue now, it could prove to be as contentious as 2012’s vote on removing racist language from the constitution, which at one point would removed the state’s requirement to fund all schools in the state based on population metrics before the law was altered (and still failed). Despite this, large, well-funded organizations like Personhood Alabama, continue to lobby for these bills. Roy Moore, the state’s oft-quoted Chief Justice of the Alabama Supreme Court, offers his strong support for the laws as well.

At the national level, a bill was introduced in February of 2015 seeking a similar outcome to the Alabama amendment. Though it continues to wait in limbo, identical bills have been introduced and all failed at various times in congressional history. The question of whether or not life actually does begin at conception is unimportant in the context of the legality of abortion. Legal personhood begins at birth, not conception. Not that states like Alabama haven’t tried to offer such rights; it was only a couple of years ago that the state tried to appoint attorneys for unborn embryos and fetuses if a minor’s parents refuse to consent to an abortion (yet another roadblock facing Alabama women).

Find out if your state is debating a bill like this and take action to support reproductive rights. Call your state lawmaker and put an end to repressive anti-choice laws.