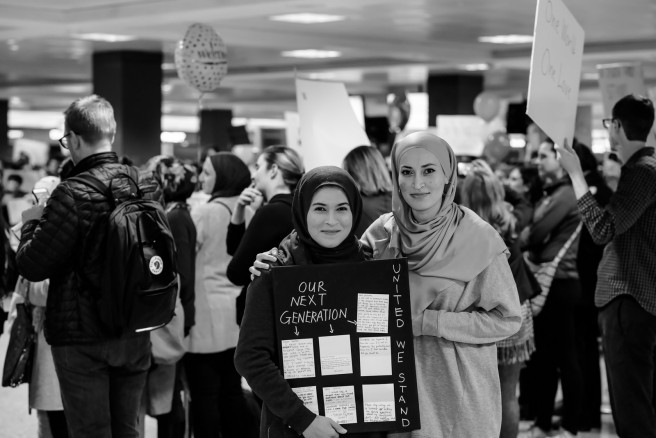 It feels as though with every notification of a new Executive Order from Trump, I feel a 20 pound weight being added to an imaginary backpack full of emotional baggage.

However, Trump’s Muslim Ban (that’s what I’m calling it, because that’s what it is) really struck a nerve. Placing a hold on refugee resettlement for 120 days, and also banning travel to 7 countries, Trump’s ban is clearly unconstitutional, the result of Islamaphobia, and the US’s resistance to accepting that white men continue to be the number one creator of terrorism in this country. Resisting the urge to stay in and eat ice cream, I decided to attend an immigration rally/protest at the Atlanta airport. Hartsfield-Jackson is the world’s busiest airport. Atlanta serves as a cultural hub and a home to many refugees, several of whom I have the pleasure of interacting with at my internship at a local refugee resettlement agency. I’ve been to many a protest, but this one felt different. For one, it was very diverse. In terms of race, gender, and also age. Also, it was apparent that this was many people’s first times participating in an action like this. I proudly carried my “F*** Mainstream Feminism” sign, and observed the crowd.

One of the first signs I saw was carried by a white person. It said “Support Legal Immigrants.” I couldn’t help but let out an audible groan. Except, I’m lying. Since it’s me we’re talking about, my version of an audible groan is “What an icky sign.”

As someone who works with refugees, but also organizes for an org that prioritizes undocumented people, I could feel myself literally gagging. This well-intentioned sign was doing more harm than good. I began to wonder if most people know that there isn’t much difference between a refugee, and an undocumented immigrant. Both groups of people are most likely trying to escape persecution from their home country, be closer to family, or have more economic opportunity. Both groups are choosing a long and difficult battle that could result in death, prison, and overwhelming stigma. Both groups are most likely fleeing their country due to the foreign policy that the United States and Western World enacted. Both groups matter, deserve dignity, respect, humanity, and the autonomy to make their own decisions regarding reproductive justice.

By emphasizing that you only support immigrants that are “legal,” you show you lack the analysis to understand that most people don’t immigrate “illegally” for fun. You also underestimate just how difficult and somewhat the refugee process in the United States have been, even before Trump even came into office. Becoming a refugee takes several years of security screening. Once someone is granted official refugee status by the UN (which could take years) the process for a refugee coming to the United States takes 18-36 months, but the UN now estimated that worldwide, the average wait time in a refugee camp can be as high as 17 years. Refugee resettlement involves years of uncertainty, separation from loved ones, and moving to a foreign country where you often aren’t considered competitive in the job market, or fully accepted into society.

Plus, there’s this whole false idea of “legality” being synonymous with “morality.” There are plenty of things in the United States are “illegal” but aren’t morally wrong by most people’s standards. The United States criminal justice system, like any system of oppression, is fueled by money, and furthering the interests of the state. Borders and citizenship are social constructs. This isn’t to say that they don’t matter. It’s to say that the way we view them is subjective, and reflective of our place in the world and the privilege we maintain.

Many privileged liberals operate under the assumption that America is, and will continue to be “a place built by immigrants.” A place where everyone is respected, and if you just buckle down and pull up your bootstraps, you will be able to find success. However, this is ahistorical and also ignores the HUMONGOUS role that capitalism and White Supremacy had in the formation of this country, and our laws. The America we are experiencing now isn’t out of the ordinary. The America we are experiencing now, is just a more blatant form of the systems of oppression that people (especially immigrants) of color, have had to navigate since the beginning of Christopher Columbus’s rude ass “discovery,” of a society that had already existed.

There’s a way to fight for the rights of immigrants without enforcing the harmful systems that have caused the immigration crisis to begin with. This would require us to leave from blind and inaccurate nationalism, and to gain more comfort in criticizing this country that has continued to fail our neighbors abroad.