Amber the Activist and Victim Blaming in Rape Culture 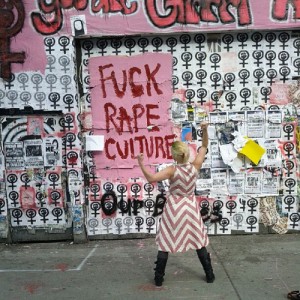 2015 was (unfortunately) the year of perpetuating rape culture and victim blaming. After her ex-husband and ex-boyfriend both made disparaging comments about famed feminist and actress, Amber Rose, she threw her first annual Slut Walk in downtown L.A, raising money for the Amber Rose Foundation and various other sexual assault advocacy programs, reclaiming negative sexual slurs and raising awareness of sexual assault using her own harrowing account of abuse. Bill Cosby was (and still is) entrenched in a massive rape scandal, with allegations of assault from more than 50 women over a span of decades, with people renouncing him as an actor and wondering if the allegations are true.

2016 has barely started, and now, we have the case of Amber Amour, better known as Amber the Activist.

Amour is a 27 year old African-American woman and activist who is behind the Creating Consent Culture and Stop Rape, Educate campaigns. She often travels statewide and globally to promote her campaigns and provide sexual health education in an effort to create an anti-rape culture. Just a few days before the new year arrived, Amber traveled to South Africa to spread cultural awareness surrounding her campaign and to host a workshop at the University of Cape Town.

The exact date of Amour’s attack is unknown, since Instagram accidentally removed the post, but in early December 2015, Amour posted a selfie of her crying. The caption? A haunting description of what started out as a quick trip to see a friend in a hostel but turned into Amour’s violent rape. Long story short, she didn’t have hot water in the facility where she was staying, so a guy approached her and asked if she want to take a shower. Desperate to be clean, she agreed.

“As soon as I got in the bathroom, he forced me to my knees,” Amour said. Amour asked the man to stop, which caused him to grow more violent, and he then penetrated her vaginally and anally. According to Amour, he then put her in the shower. He then joined her and raped her again under the shower water, then fled. She took a picture during the aftermath.

Following her Instagram post, there were supportive comments applauding her for standing up for sexual assault survivors, but other comments were nasty and filled with victim blaming.

“You are honestly a disgusting excuse of a human being,” Instagram user lexuussss commented. “YOU ARE THE REASON ACTUAL VICTIMS LOSE CREDIBILITY. You took a pic of your rape kit??” (Indeed, Amber did).

Another commentator wrote, “It’s beyond me that someone who was raped before and educates on rape would put themselves in a situation such as this. “

That comment, my friends, is one the scariest problems with rape culture.

What I saw and heard after Amour’s story is what I see and hear from a lot of people who are told about sexual assaults, and even about the deaths of my young black brothers and sisters who are killed everyday ON CAMERA with no trial, indictment, or truth. It’s a form of victimsplaining and victim blaming that takes the responsibility away from the assailant.

“They asked for it, look how they was dressed.”

“They had no business at that party with that person.”

“Maybe if they hadn’t drank so much, they wouldn’t have been raped. Have some class.”

All of those are sad, dangerous examples of victim blaming, which is a reproductive justice issue that could lead victims to experience depression, childbirth complications, lowered self esteem, etc. Furthermore, these are societal doctrines that are inherently dangerous to the psyche of a sexual assault survivor, and they simply aren’t true. If young girls and babies get raped, would commentators say they asking for it? Alcohol consumption impairs your ability to think/act depending on the limit but it isn’t a direct causation to rape. Hanging out with someone (male or female) intimately or even platonically is not an invitation to rape/invade someone’s bodily autonomy without permission.

Stop telling our daughters not to wear ‘that dress’ or no to go to ‘that party.’ Instead, start telling our sons NOT TO RAPE. Rape culture is everywhere-songs, books, movies, and memes. No one asks to be raped, and no one deserves to be raped. No means no, even if I’m standing nude in a shower right next to you.

I have reserved opinions about the Bill Cosby case and about Amour’s case, but at the forefront of my activism is establishing respect for one’s bodily autonomy and stopping rape culture altogether. We have to raise awareness about the joys of sexual consent and provide proper sex education — Google is too damn free not to know.

Get educated and listen to rape survivors when they speak.