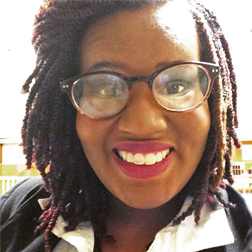 Major: Journalism with a minor in Women's Gender + Sexuality Studies

Favorite sex scene in a movie: Mookie and Tina in Spike Lee's Do the Right Thing

Hidden Talent: I'm not too shabby at interior design. natural_ambtion

Reading is fundamental, and always has been.  I love to read and recently bought four new books I can’t wait to dive into. Literacy can be considered a reproductive justice issue because families that emphasize literacy in young people, foster adults who engage politically as well as socially. Unfortunately, according to a HuffPost poll, 28% of people haven’t read a book at all in the past year, and the literacy rate is stagnant. What we read and our ability to do so is in serious jeopardy, and our youth are affected the most. Thankfully,  one young voracious reader out there saw a need and decided to take action. Marley Dias, an African-American sixth grader from New Jersey, took her love of reading and her frustration over the overwhelming whiteness of the protagonists she was required to… Read more »

Amber the Activist and Victim Blaming in Rape Culture

[Trigger warning of sexual assault, rape and mental trauma.] 2015 was (unfortunately) the year of perpetuating rape culture and victim blaming. After her ex-husband and ex-boyfriend both made disparaging comments about famed feminist and actress, Amber Rose, she threw her first annual Slut Walk in downtown L.A, raising money for the Amber Rose Foundation and various other sexual assault advocacy programs, reclaiming negative sexual slurs and raising awareness of sexual assault using her own harrowing account of abuse. Bill Cosby was (and still is) entrenched in a massive rape scandal, with allegations of assault from more than 50 women over a span of decades, with people renouncing him as an actor and wondering if the allegations are true. 2016 has barely started, and now, we have the case of Amber… Read more »

Black Twitter’s razor sharp wit and social conscience didn’t hold back in 2015. They opened the public discourse on the role police brutality played in the deaths of Freddie Gray and LaQuan McDonald, while dismissing whites who complained about an all-black casting of The Wiz, and praising the Mizzou uprising that changed the social landscape of a university. But this Texas case regarding affirmative action takes the cake, and frankly it got me rubbing my temples in disgust. A white female prospective student, Abigail Fisher, filed a lawsuit against the University of Texas at Austin after she was denied admission to the university due to — she alleges — her race. She claims affirmative action is the reason she was denied, and students with fewer qualifications and less intelligence (students… Read more »

Trans Day of Remembrance — We Remember

Tomorrow is Friday, November 20. Exciting times because we’re a few days from Thanksgiving, turkey, warm meals and family, but equally and devastatingly more important is TDOR — or Trans Day of Remembrance as the traditional finale to Transgender Awareness Week, which is celebrated November 14-20 of each year. For those who are unaware, the Trans Day of Remembrance was started by trans* advocate Gwendolyn Ann Smith as a vigil to honor the memory of Rita Hester, a transgender woman who was killed in 1998. The vigil Smith held was a tribute to all of the trans* people who lost their lives to violence that year and has since become an annual memorial to be celebrated, mourned, and remembered all across the globe. The amount of trans* folks that were… Read more »

To be honest, I had a great post in mind for today pertaining to love and fat bodies. Had it perfectly crafted, ready to lament of the realities of the subject and how people could look at it from a new, healthier perspective. But then my heart shattered in two and I had to follow my heart. Trigger warning in advance for uncomfortability, white supremacy, racism and the dehumanization of Black college students. If you’ve even been remotely following the news, you would know the immensely scary and heartbreaking wave of social justice unrest that the University of Missouri (or so affectionately called Mizzou) has been enduring for the past 48 hours. It all began when black graduate student Jonathan Butler went on a hunger strike a week ago at… Read more »

It just got real for the state of Ohio. In what is quickly becoming a depressing pattern, the Ohio Senate quickly passed legislation to block state funding for Planned Parenthood’s health and education programs, which means all of that funding will instead be given to other health centers who do not perform abortions, have information on available abortion clinic options or do any sort of family planning. Senate Bill 214 passed the Senate voted 23-10 to defund PP. SB 214 explicitly states that state and federal funds cannot be used for “non-theraputic abortions, defined as “an abortion that is performed or induced when the life of the mother would not be endangered if the fetus were carried to term or when the pregnancy of the mother was not the result… Read more » 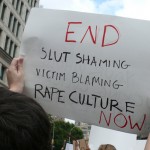 Stop slut shaming. The fact that I have to even write about the fact why this is wrong in 2015 is exhausting and shows just how much society doesn’t value women for what is probably the millionth time in history. Let me read ya’ll for filth right quick. All of these slurs — slut, hoe, thot, whore, are societal and social constructs. It’s so irritating when cisgender, heterosexual males say, “There’s a difference between hoes and real women.” I hear it all the time, see it all the time in memes on the internet. Those slurs were made to police the sexual agency of a woman’s body and sexual decision, both of which are none of your damn business. There is no difference between a hoe and a woman — we’re all… Read more »

#ShoutYourAbortion and Questions of Morality

If you’ve been paying attention to the news lately and paying attention to social media, I hope you’ve noticed the sad dilemma of threats from Congress to defund Planned Parenthood. Last week, by a 287-147 vote, the House of Representatives voted to pass a bill that would defund what is said to be the nation’s largest reproductive health provider. Wednesday began the process of one of several planned hearings on the heels of undercover videos from anti-abortion activists who claim Planned Parenthood benefited from the sale of fetal tissue. The hearing, which was entitled “Examining the Horrific Abortion Practices at the Nation’s Largest Abortion Provider,” did not allow any representatives from Planned Parenthood to attend, which was called ‘political theater at its’ worst.’  The bill might die in the Senate… Read more »