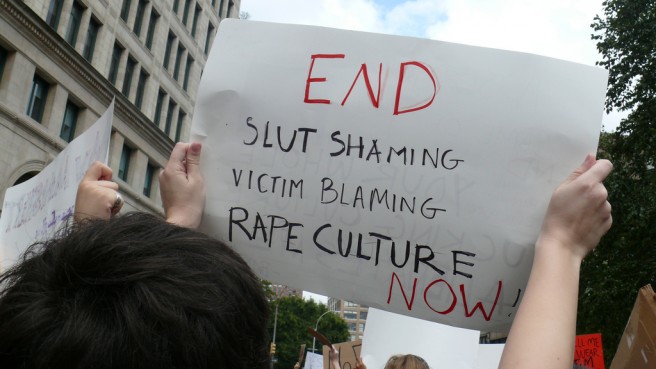 The fact that I have to even write about the fact why this is wrong in 2015 is exhausting and shows just how much society doesn’t value women for what is probably the millionth time in history. Let me read ya’ll for filth right quick.

All of these slurs — slut, hoe, thot, whore, are societal and social constructs. It’s so irritating when cisgender, heterosexual males say, “There’s a difference between hoes and real women.” I hear it all the time, see it all the time in memes on the internet. Those slurs were made to police the sexual agency of a woman’s body and sexual decision, both of which are none of your damn business. There is no difference between a hoe and a woman — we’re all women, period. If she has sex with 50 men in one night, it’s her choice. It’s not affecting you or life, paycheck, sanity or health. That literally has to be the dumbest thing on Earth to judge someone by the amount of sexual proclivities they engage in. The amount of sex someone has is not their identity, it’s one aspect of their lives. A woman’s worth isn’t exclusively tied to her sexuality; it’s super arbitrary. Stop calling her a hoe and call her by her name.

People also have got to stop with this “respectability story.” Men (and other women, sadly) love using a woman’s occupation in comparison with another to make a failing attempt to demean another woman. For example, a woman who’s a doctor is supposed to get more respect than a stripper because a doctor is saving lives while a stripper (I call them midnight ballerinas, it validates them more in a dignified manner than the word strip itself) takes her clothes off for the enjoyment of others. This is extremely problematic, because one is essentially saying that one woman is more deserving of respect due to her occupation. No ma’am, that’s not the way it works. Both women have an occupation and are living their lives. More importantly, they’re both human beings at the core working for survival. End of story. Slut shaming reflects broader systems of power that continue to demean and harm women and prevent us all from achieving true gender equality.

Men/other women: “Have some self-respect, hoes don’t get wifed.” News flash: not every woman’s top priority is to be someone’s wife! Patriarchy has so much psychological power that we as women are conditioned to keep men in mind in whatever we do, especially sexuality. We live in a society where systemically, women have been conditioned by their mothers to be pure. Cook for your husband. Be quiet about sex. Be modest. It’s oppression of women’s sexuality. It amazes me how a person can glorify nude models, strippers and sex workers but shame them when they own their sexuality. The misogyny is so dead and double standards won’t be accepted.

Bottom line is, don’t let fragile masculinity, patriarchy or other women pull you into a hole of policing sexual agency. You’re not supposed to be quiet, pure or a role model. You’re supposed to be an intelligent, sexual being who has agency over her body and sexual activities. It is not shameful or gross — it’s life. Celebrate it! But use safe contraceptives first, then go celebrate. Be unapologetically you.