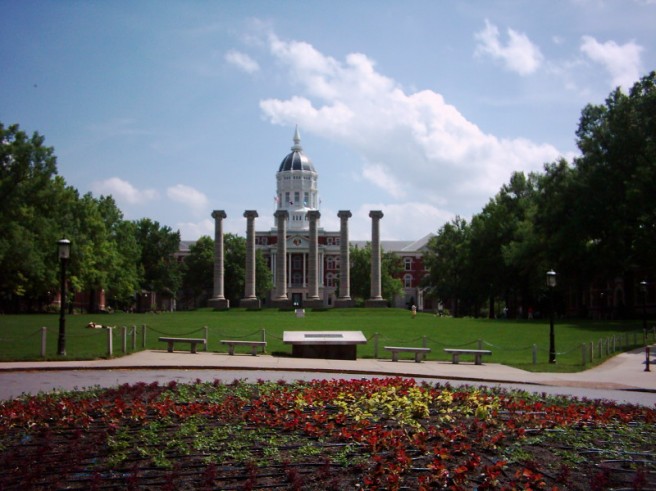 To be honest, I had a great post in mind for today pertaining to love and fat bodies. Had it perfectly crafted, ready to lament of the realities of the subject and how people could look at it from a new, healthier perspective. But then my heart shattered in two and I had to follow my heart.

Trigger warning in advance for uncomfortability, white supremacy, racism and the dehumanization of Black college students.

If you’ve even been remotely following the news, you would know the immensely scary and heartbreaking wave of social justice unrest that the University of Missouri (or so affectionately called Mizzou) has been enduring for the past 48 hours. It all began when black graduate student Jonathan Butler went on a hunger strike a week ago at Mizzou to protest and advocate for the removal of University System President Tim Wolfe following a series of incidents that are detailed in Butler’s letter announcing the start of his strike, including the driver of Wolfe’s car clipping a #Concerned1950 protestor during the homecoming parade while Wolfe looked on and issued a half-hearted apology a week later. Other incidents including a swastika drawn in feces in a residence hall, graduate students robbed of their health insurance, Missouri Student Association president Payton Head being called a “n—–r” on campus, and Planned Parenthood being stripped from campus as well. Butler was tired and went on a hunger strike, which is no easy feat or light decision; it got real. So real that Butler updated his will and signed a do not resuscitate order and left instructions of what he wanted to be done in case or a seizure or coma.

“This was not a light decision,” Butler told CNN. “I really took some time with consulting my spiritual leaders, my pastors and other mentors about this decision, and knowing that I am truly committed to this change, that’s what I really set my heart on doing.”

Soon after, students and faculty rallied around him in support. There was a boycott, two graduate student groups called for protests and a group of faculty offered help. But most notable was the football team. The players, both black and white, threatened (with their coaches support) not to practice or play any games until Butler’s strike was over. The tactic work, because on Monday Wolfe resigned, citing “it was the right thing to do.” Butler ended his strike and all was back to normal — so we thought.

Here’s where the racial tension increased.

There were a lot of students who were very unhappy about Wolfe’s resignation (i.e the white, privileged and unmarginalized students on campus), so they took to the anonymous social media app Yik-Yak to express their hatred. Among some of the messages were:

“Some of you are alright. Don’t come to campus tomorrow.”

On Wednesday night, Twitter reports from students at Mizzou began to surface. One Twitter user, @mariehaileyy gave a live account of black students evacuating campus and trying to find safety in each other while white students terrorized them.

“Racist cult in speaker circle blue pickup truck with no license plate and white guys circling their car around us don’t go to campus,” she tweeted. Other reports and even videos surfaced of a white male student shouting slurs and how he was fed up with the Black students on campus.

But what’s even more disgusting was the response (screenshotted for proof) one professor gave when he received an email from a concerned Black student when she said she felt unsafe to go to campus and take her exam in his class because HER LIFE was being threatened. What was this lovely professor’s response?

“If you don’t feel safe, then don’t come to class. I will be there, and an exam will be administered in our class. If you give in to bullies, they win. The only way bullies are defeated is by standing up to them. If we cancel the exam; they win. If we go through with the exam, they lose. I know which side I’m on. You make your choice. Dr Brigham.”

In contrast, another white professor, Bradley Harrison Smith, posted the email that he sent his students on Facebook, in which he said that to hold class, he would be “participating in the marginalization of minority students by supporting an educational environment in which certain students feel safe while others cannot. Attending class on Wednesday in light of the recent threats would be a privilege available to some of my students so I’ve decided that it will not be a privilege available to any of my students.”

Through all of this, universities across the country are standing in solidarity with Mizzou, posting messages on Facebook, Twitter and Instagram and holding black outs (where students wear all black clothing) and holding solidarity circles to stand with Mizzou, including my school, Bowling Green State University. I’ll definitely be in attendance. While I am proud that we’re able to come together, I’m enraged that we always come together in times of fear, racial unrest, and blatant racism.

Why is it that media outlets are barely covering this? I don’t think you understand my pain, frustration and sadness as a Black person that in 2015, WE HAVE NO FREEDOM TO BE OURSELVES. We have no safe spaces. We have no privilege. If Black students were making similar threats to white students, there would be 24/7 news coverage. The media seems only interested in telling the story of Black criminals, not when Black people are the victims of crime.

The terrorization of Black bodies is nothing new. Stemming from lynchings and slavery days, we were taught to understand that our bodies never belonged to us, they were to be raped, beaten, pillaged, made a mockery of and placed on display. This Mizzou tragedy proves the same concept. Our melanin is that much of a threat to privileged people. You want us to be your sports stars and teach you good recipes and sing and dance and have soul but stay quiet when you want to exude power over us. We’re constantly having to prove that we belong too. It’s exhausting.

I’m fed up. I now have to worry if I’m going to die tonight or have to hashtag a classmates name all because of an institution that was never made to protect us is just doing their job. America means anyone devoid of melanin, not us. If you don’t understand why me being in my body isn’t safe and spans bigger than racism, you’re part of the problem. If I made you uncomfortable, then I’ve achieved ¼ of my job. You’re welcome.