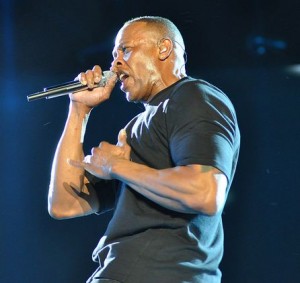 In late August of this year, Straight Outta Compton, the film biopic that told the story of the famous ‘90s hip hip group N.W.A. (Niggas With Attitude), hit theaters nationwide. The film was met with a widespread positive response from hip hop historians and fans of traditional Black rap music as well. I still have not seen the film, and in some ways, I’m glad I didn’t.

N.W.A is a rap group from the late 80s, early 90s that first brought gritty, inner city gangsta rap to the forefront of mainstream music. The group was primarily comprised of O’Shea “Ice Cube” Jackson, Andre “Dr. Dre” Young, and Eric “Eazy-E” Wright. The group released the album “Straight Outta Compton” to the tune of 750,000 copies in 1989. The film documents critical moments in NWA’s career as a group, such as the release of albums, navigating police brutality and hood politics, the founding of Death Row Records, solo careers and the death of Eazy-E, which came as a major blow because he died of complications of AIDS, which was rampant but a taboo subject back in the 80s and 90s.

The film company is already allegedly casting a sequel to the film and ticket sales have been through the roof. All that is great and fantastic, especially since African-American films almost never do well in the box office, but we’re ignoring a major issue in the film here.

If you dig a little deeper into the film, the history of N.W.A and the members of the group themselves, you’ll find that Dr. Dre has a rap sheet of abuse against women.

In 1991, Dre assaulted Dee Barnes, a young African American hip hop journalist who was the host of the 1991 show Pump It Up! Barnes had previously conducted an interview with Ice Cube, which was misinterpreted in usual media fashion and unfortunately ended in him beating her to the floor in the L.A nightclub Po Na Na Souk. He held the door closed with his leg while he assaulted her. He also assaulted his girlfriend, Mi’Chele, regularly. When she was asked why she didn’t want her assault portrayed in the film as well, she said she was ‘just a quiet girlfriend who got beat on and was told to sit down and shut up.’

A full length piece on Gawker about Barnes’ reflection on the film gives great insight to the traumatic incident, and HuffPost Black Voices just published a piece on Dee Barnes giving an exclusive interview with them for the first time since 1991 describing the attack. Few are holding Dr. Dre accountable, as he’s sitting on huge returns from the movie, mounds of cash that come in from every song download and movie viewing, while Dee Barnes is in the media recounting horrific details and explaining how her career was impacted.

That right there is the problem.

Hip hop has taken on the subject of intimate partner violence and exploited it in the manner of dope beats and catchy lyrics. We as listeners have become so desensitized to this dark issue that we let the message go right over our heads.

Let’s make one thing crystal clear- there is NOTHING fun, catchy or cool about domestic violence. It’s painful, degrading and a make or break situation for most victims. Their lives and kids’ lives (if they have any) are at stake. That is no comedy show, folks.

Let’s take Beyoncé’s 2014 smash hit, Drunk in Love. It’s great. However, I won’t overlook the fact that there is a disturbing lyric in there that most people will say isn’t a big deal:

Anna Mae, more widely known as Tina Turner, was the wife of Ike Turner. In the biopic about of Tina Turner, What’s Love Got to Do With It, there is a scene where Ike was feeding Anna Mae a piece of cake in a restaurant, and when she refused it, he started throwing objects at Anna Mae and her lady friend.

Most people overlook that and even glorify it, singing it loudly while dancing. But with Beyoncé dubbing herself as a feminist, it disappoints me that she would shoehorn such a dark lyric into a sing celebrating love and lust.

That example is exactly the type of forlorn disregard I’m talking about. If you take a closer look at some of the rappers that you listen to, like Eminem (he’s the biggest offender), Lil Wayne, Tyler the Creator, N.W.A, J.Cole, Wale and  many others, you’ll see the misogyny and with some, domestic violence. Most of us young people (especially college students) are so desensitized to misogyny and abuse in rap lyrics that we start to believe that it’s not a big deal. It’s just a line used to add flair or drama to the song; not a big deal. To me, that’s sad and very scary. When we expose this type of behavior to kids younger than us, it becomes an even more dangerous situation because now they’re growing up thinking this is normal and warranted. It’s cute; it’s cool; not a major deal.

Intimate partner violence is a HUGE deal, whether it’s in a sly rap lyric that goes over your head or a feel good music video. It’s patriarchal, dominant, psychological, inhumane, and in many cases fatal.

Hip hop has always had a dark side of abuse and misogyny. But it’s also artistic expression at its best, a hidden and deadly glorification at its worst. We support it because we love the artist and the music they create, so we’re willing to overlook it. Honestly, that’s unacceptable.

Every October, as the air gets cooler and the fall season gets into full swing, I participate in an event that spans northwest Ohio called the Silent Witness Project. SWP was started in 2002 by my Women’s Studies professor and director of BGSU’s women’s center, Mary Krueger, when a BGSU grad’s body was found on our campus after being killed by her husband. Each year, there is an unveiling ceremony where life-size cardboard, faceless figures of the women are unveiled and a volunteer close to the women’s age reads the story of her death. The youngest victim was 14 and the oldest was 85.  Most of these women are close to home-from, Toledo, Perrysburg — even college students at BGSU. I read for a 19 year old named Shy’Nerra Grant who was shot by her boyfriend after he broke in her home. Her mother comes to watch me read every year and this will be the last year before Shy’Nerra’s figure is retired. The first year I read for her, I was her age, a tender 19. I cried that whole week. Since then, she’s grown on me and will forever live in my heart.

Domestic violence isn’t just physical between you and your partner. It can also be psychological, verbal or a mix of the three. It’s a reproductive justice issue because at its most basic level, if someone hurts you in a serious manner without your consent, they are taking away your bodily autonomy. Reproductive coercion fits the script too, when your partner exerts power over your reproductive decision making or life, like threatening a woman to get an abortion, poking holes in condoms, getting rid of or refusing contraceptives, etc. Domestic violence in hip hop is a cycle of victimization rooted in racism, patriarchy (but can span to LGBTQ folks as well), oppression and perpetuated by media. It’s all about power and control.

I’m not saying stop listening to your favorite music, scour rap songs for degrading lyrics but I am telling you to be more vigilant about what you listen to and view in the media. It isn’t in those songs on accident. Dig deeper than the fun beats, awesome lyrics and good singing voices. Domestic violence is scary, and everyone should understand that it’s not normal; it’s criminal inhumane and a terrible way to show you “love” someone. If you truly love someone, you don’t place conditions on love. Know the signs, get educated, and be vigilant. All that glitters isn’t gold.