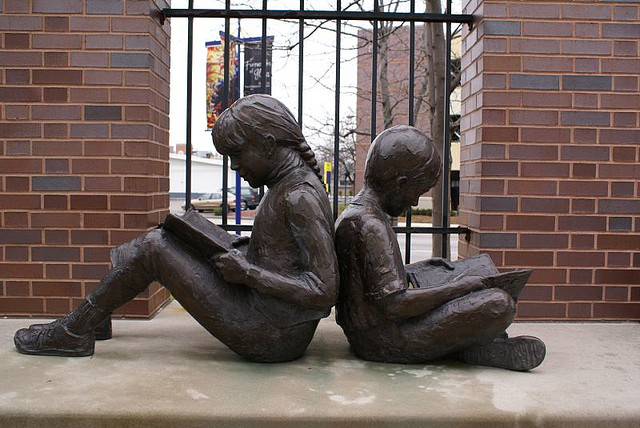 Reading is fundamental, and always has been.  I love to read and recently bought four new books I can’t wait to dive into. Literacy can be considered a reproductive justice issue because families that emphasize literacy in young people, foster adults who engage politically as well as socially. Unfortunately, according to a HuffPost poll, 28% of people haven’t read a book at all in the past year, and the literacy rate is stagnant. What we read and our ability to do so is in serious jeopardy, and our youth are affected the most.

Thankfully,  one young voracious reader out there saw a need and decided to take action. Marley Dias, an African-American sixth grader from New Jersey, took her love of reading and her frustration over the overwhelming whiteness of the protagonists she was required to read about in school, and created change.

“I told my mom I was sick of reading about white boys and dogs, I can’t connect with them,” Dias said in an interview. The lack of diversity in her school’s literary tastes was so stark that Dias grew tired of reading about characters that she couldn’t relate to and that didn’t look like her. After her mother, Janice Dias, asked what she was willing to do about it, #1000BlackGirlBooks was born.

At first, Dias wanted to create a book guide that featured black characters, but in November she decided to take it a step further and only collected books where black girls are the main character — not the sidekicks or background characters.

“I know there’s a lot of black girl books out there, I just haven’t read them,” she said. “So if we started this I would find them and other people would be able to read them, as well.”

So far, Dias has collected over 400 books, and plans to hit 1000. The project will end February 1st, and working with her mother’s organization, GrassROOTS Community Foundation, she’ll donate the books (replete with a guide broken down by author and age) to Retreat Primary and Junior School and Library in the parish of St. Mary, Jamaica where her mother grew up. She also hopes to start a small library in Philadelphia.

“For young black girls in the U.S, context is really important for them-to see themselves and have stories that reflect their experiences that are closer to what they and their friends have,” Dias’s mother said.

Dias, who one day hopes to own a magazine, says she’s going to continue social action work for the rest of her life.

“[Representation] definitely matters because when you read a book and you learn something, you always want to have something you can connect with,” Dias said. “If you have something in common with the characters, you’ll always remember and learn a lesson from the book.”

I applaud this little cinnamon brown girl for recognizing a need and taking action on it. But anytime a child must resort to grassroots tactics to affirm her visibility in the media she consumes, you know there’s a problem.

“Diverse kids’ literature gives children of color a chance to see themselves as heroes, which is vital,” Noah Berlatsky wrote  for Pacific Standard in 2014. “But smart, thoughtful books with nonwhite protagonists can also give white children a chance to see … people of color as something other than anxiety-producing others or stereotypes.”

We need to introduce more children’s, young adult, and adult writers of color that permeate every genre- from coming-of-age drams to sci-fi thrillers. It’s important to see ourselves represented in all forms of media, including literature — so that our stories can be heard clearly and creatively, while ultimately displaying the plights, talents, and depth of our people.

Read. See yourself. Then go set the world on fire.