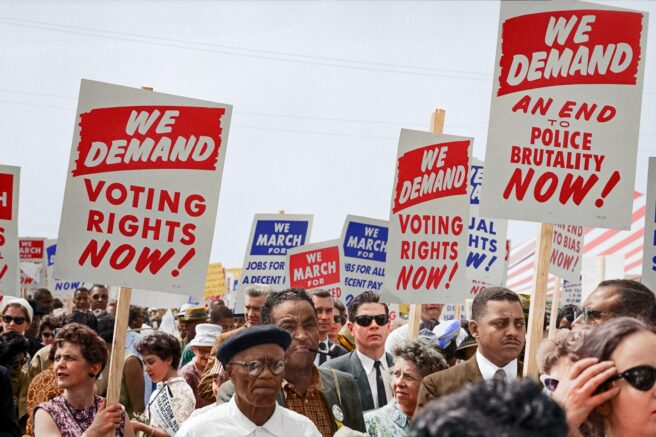 There is no other way to put it: American democracy is on the brink of collapse. Last year began with an attack on the Capitol the likes of which haven’t been seen in over a century. Supporters of the former occupant of the White House flew Confederate and pro-security force flags while threatening to murder the former Vice President for not undemocratically overturning the results of the 2020 Presidential election. This occurred the day after the former Confederate state of Georgia saw record-breaking Black voter turnout, electing the state’s first Black and Jewish senators, respectively. Over the course of 2021, the United States saw an unprecedented number of anti-voting legislation passed. According to the Brennan Center, in 2021 alone, 19 states implemented 33 laws that make it harder to vote. This is occurring not even a full year after a record share of eligible voters turned out to the polls, with most voting an openly bigoted President out of power. And help is not on the way.

Despite the fact that the Democratic Party currently controls Congress and the White House, voting rights legislation, namely the bill endorsed by Civil Rights giant John Lewis, was killed, and not by Republicans, but by Democrats. There are many reasons for this. The Democratic Party is a big-tent party, and the views of its members widely span the spectrum. Many factions of elected Democrats don’t have anything in common beyond an aversion to the loud, attention-grabbing bigotry of Republicans. For whatever the reasons, one fact rings true: Democrats are not going to be the opposition party who saves democracy. They cannot be who we need them to be in this moment.

Democracy is not a given. It is something that needs to be fought for overtime. Right now, the United States is entering a period where attacks on its democracy are so great, we need to be prepared to fight for it. Especially given the fact that this country is young and has only been democratic for a few decades. Despite the popular myth of history taught to American schoolchildren, the United States was not a democracy when it was first formed. Due to over a century of Black and Indigenous subjugation, the likeliest date American democracy started was 1965, the year the Civil Rights Act was signed into law.

This latest period of anti-voting laws and violent attacks from America’s far-right is not a pivot from American values, but a continuation of it. In its short existence, the United States has seen Black people harassed, beaten, and killed for voting. The current era the United States is in no longer requires direct violence to bar Black people from voting. Instead, false hysteria about stolen elections and undocumented immigrants voting is pumped into political discourse, sowing seeds of distrust in democracy. But not distrust in people who aim to make it harder to vote. The far-right is framing Democrats and non-white voters as enemies of the will of the people. And as we saw on January 6th, they are more than willing to respond to peaceful voting with life-threatening rioting.

Despite the teachings of American exceptionalism, bad things can happen here. With unparalleled assaults on the ability to vote, and attempted coups to establish right-wing rule being made, it is safe and accurate to say that democracy in the United States is in danger. During this period of anti-voting legislation being passed, it is more important than ever to ensure the right to vote remains accessible to all Americans. Without the ability to choose political representation free from barriers, intimidation, or violence, the United States cannot call itself a democracy at all.