Anti-choice lies will continue to fly at “crisis pregnancy centers” 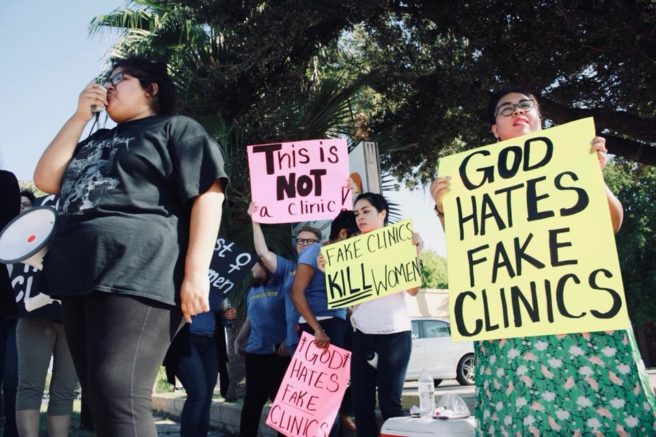 On July fourth, as my family draws to the dining room table, our conversation turns to politics. My mother mentions blocking hate speech on Twitter, resulting in users getting kicked off, my uncle feels attacked and argues, “if we say freedom of speech, that means all speech.” Why should we censor some speech and not others? Why is it permissible that “oppositional” speech be omitted?

On June 26th, the Supreme Court of the United States handed down a 5-4 ruling involving this matter in National Institute of Family and Life Advocates (NIFLA) v. Becerra, Attorney General of California.

The NIFLA v. Becerra case grappled with the regulation of speech at so-called “Crisis Pregnancy Centers” (CPCs) in California. The State, via the California Reproductive Freedom, Accountability, Comprehensive Care, and Transparency Act (FACT Act), required licensed and unlicensed CPCs to notify their clients about State-funded services for all pregnancy-related care, and unlicensed CPCs to publicly display that they are not medically certified by the State.

The State argued that having a comprehensive and inclusive notification of State-funded services is a vital resource for all pregnant people visiting CPCs, many of whom are under the assumption that their options are limited due to funds. In actuality, California does have funding programs for low-income people seeking abortion or maternity care, however, CPCs were not divulging this information. The State also argued that unlicensed CPCs should disclose their certification status because they are not medical professionals and their clients, who will be exposed to opinionated influences, should be aware of this.

The ruling was in favor of NIFLA— regulations of this sort cannot be mandated by the State. The majority’s opinion, by Justice Thomas, hinged on the notion that the First Amendment speech rights of CPCs were violated by regulating the speech according to content.

Given the anti-abortion stance of CPCs, the majority opinion argued that these regulations would alter the content of their speech by making it inclusive of services they oppose. In regards to requiring unlicensed CPCs to post about this status, the majority opinion found the claims about clients not knowing their status hypothetical. Additionally, unlicensed CPCs are not bound to comply with these regulations because they are not certified.

This anti-choice ruling allows these fake clinics to lie and continue their shameful practice of manipulating people seeking honest medical advice. And, of course the Court does not apply the same speech protections to actual doctors seeking to provide real, actual medical advice. As pointed out in the dissent by Justice Breyer, the same logic has not applied to regulation of pro-choice providers who are forced by anti-choice motivated laws to impede a person’s path to abortion. A major reproductive rights case from 1992, Planned Parenthood v. Casey, states “a statute can require patients who have decided on abortion to be told… the ‘probable gestational age of the unborn child,’ medical assistance for childbirth, printed materials describing the fetus, potential child support, adoption and alternative services” (Breyer, 10). Breyer posits:

The answer provided by the majority falters. By omitting State-offered material resources from the rhetoric of CPCs, they actively limit their visitors access to vital, time-sensitive information and services. This is something I, and many others, experience as residents in Georgia. We are surrounded by CPCs and their anti-choice establishments isolate us from positive reproductive health spaces that do not villainize us, but instead expand our web of resources with affordable access to birth control, abortion, and other important reproductive health care. Furthermore, CPCs are not safe medical spaces for queer young people like myself to speak truthfully about our experiences. In my effort to seek medical assistance, the last thing I need is to be condemned and lied to. That is why the reproductive justice movement must continue to articulate these truths and uphold the spaces that matter until the day SCOTUS secures our access to all reproductive care options and upholds medical truth by all providers, no matter their stance in relation to choice, above all else.