Anti-choice lies will continue to fly at “crisis pregnancy centers”

On July fourth, as my family draws to the dining room table, our conversation turns to politics. My mother mentions blocking hate speech on Twitter, resulting in users getting kicked off, my uncle feels attacked and argues, “if we say freedom of speech, that means all speech.” Why should we censor some speech and not others? Why is it permissible that “oppositional” speech be omitted? On June 26th, the Supreme Court of the United States handed down a 5-4 ruling involving this matter in National Institute of Family and Life Advocates (NIFLA) v. Becerra, Attorney General of California. The NIFLA v. Becerra case grappled with the regulation of speech at so-called “Crisis Pregnancy Centers” (CPCs) in California. The State, via the California Reproductive Freedom, Accountability, Comprehensive Care, and Transparency Act… Read more » 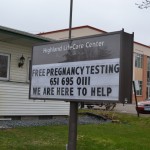 As you may remember, this past August Texas shunted over $1 million away from women’s health funding and gave it to anti-choice extremist organization The Heidi Group. The Group was tasked with expanding availability and accessibility of women’s health care services through out the state, with the intention of focusing on strengthening the presence of Crisis Pregnancy Centers. Last week, The Associated Press reported that the Heidi Group has failed in these and its own measures of success. According to the Associated Press, the Heidi Group has failed in three simple but significant areas since accepting the award money. The group was supposed to create a 1-800 number to answer Texans’ questions, massively increase public outreach and availability of the centers through social media, and update all of the participating… Read more »

At the beginning of August, I was alarmed to read that the State of Texas had awarded a little over $1.6 million to an anti-choice extremist group (surprise!). Anti-choice proponent, Carol Everett, heads the Heidi Group, a group that does not provide healthcare services, but does support anti-choice clinics and agendas. This award came from a large pool of money that the state has allocated to fund the Healthy Texas Women Program, Texas’ version of Medicaid. The program is intended to provide Texans aged 15-44 with comprehensive whole health check-ups, contraceptives, and diabetes and cholesterol treatment and monitoring. Cool beans, got it, everything makes some type of sense now; Texas is working with healthcare providers across the state to ensure Texans have quality health care. Great! …Except for the small… Read more »