As you may remember, this past August Texas shunted over $1 million away from women’s health funding and gave it to anti-choice extremist organization The Heidi Group. The Group was tasked with expanding availability and accessibility of women’s health care services through out the state, with the intention of focusing on strengthening the presence of Crisis Pregnancy Centers. Last week, The Associated Press reported that the Heidi Group has failed in these and its own measures of success.

According to the Associated Press, the Heidi Group has failed in three simple but significant areas since accepting the award money. The group was supposed to create a 1-800 number to answer Texans’ questions, massively increase public outreach and availability of the centers through social media, and update all of the participating Centers’ websites. As of the March 14th Associated Press report, none of these goals had been met. 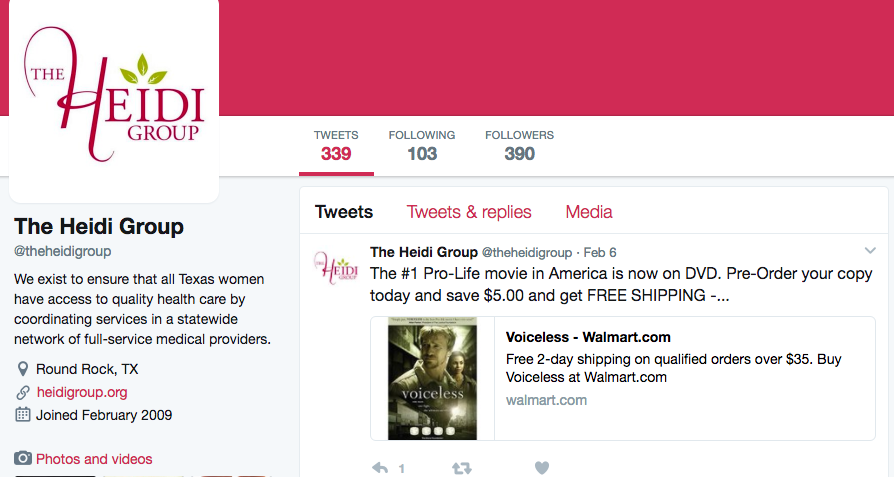 But those failures only represent goals the anti-choice group made for itself. They do not reflect the more urgent, glaring failure of the Texas government to provide reproductive health care to Texans. The diversion of taxpayer funds to this anti-choice, non-medical group was specifically supposed to fund reproductive healthcare services. How was an anti-choice group in the business of proselytizing, NOT healthcare or medicine, ever supposed to meet the reproductive and sexual health needs of the state?

For me, this remains the heart of the problem. The Heidi Group is a propaganda group, plain and simple. They’re specialty is not nor has it ever been healthcare. As anti-choice politicians at state and federal levels continue their misguided cries to defund Planned Parenthood, they point to organizations such as The Heidi Group as alternatives to the lifesaving healthcare that Planned Parenthood provides. As the Heidi Groups failure and Texas’ booming maternal mortality rate shows, this is ludicrous. The Heidi Group and the Crisis Pregnancy Centers it supports are not in any way aiming to provide sexual and reproductive healthcare. Their mission is to delay or prevent individuals from accessing abortion care, whether that be through misinformation or abortion clinic closure due to diverted funding.

The Heidi Group and Crisis Pregnancy Centers are not only not equipped or qualified to provide healthcare to Texans, they are also notably irresponsible and harmful in their treatment of cis women and LGBTQIA+ individuals. Take for example this counseling advertisement provided by one Houston-area Crisis Pregnancy Center, which promises that it can teach young women how to be “truly irresistible” by abstaining from sex until marriage. The website reinforces a gender binary and the idea that a persons worth is somehow tied to their sexual activity. WTF? This lovely PDF provided by another Houston-area Crisis Pregnancy Center boasts that it, “does not recommend or encourage the use of contraception.” Instead, the Center recommends, “When you marry, select a partner who is not infected with an STD and will remain sexually faithful during marriage.” Yall, marriage is NOT an STI prevention method! The complete erasure of LQBTQIA+ identities from the information provided, combined with the outright promotion of a gender binary and toxic gender norms is not compassionate care, it is dangerous.

According to the Associated Press and an in-depth article by Rewire, the Texas House General Investigating and Ethics Committee “will scrutinize” the $1.6 million Heidi Group award. Texans’ deserve better than fake clinics and taxpayer funded proselytizing. They deserve compassionate, informed, comprehensive reproductive and sexual healthcare. This handy link allows Texans to identify their representatives and provides contact information. Reach out to your elected officials today, they need to hear that we are watching!