Beyond the Rally Cry 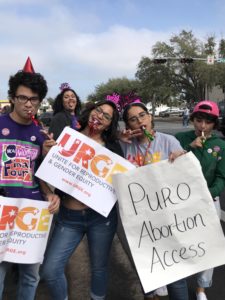 Last week, the entire nation was swept by hundreds of rallies, marches, and protests. The Women’s March commemorated the anniversary of Roe v. Wade and continued protest over the one-year mark of the Trump Administration. I was able to witness the power of these marches through three separate efforts that took place in my home. The Still We Rise Women’s March, Santa Ana Wildlife Refuge March, and the Roe v. Wade anniversary rally all took place within the same week. Over 500 people showed up to these events, all standing in solidarity and in power.

It is inspiring to see so many people in my community showing up to these events. For many, rallies are an entry point into political and community engagement. However, moving past the rally can be intimidating. There are many ways to get involved and actively work towards protecting reproductive rights, LGBTQ+ rights, women’s rights, and more.

Especially during an election year, encouraging voter engagement is essential. There are many ways to get involved. For example, in Texas, you can get deputized by the county voter registrar to help register people to vote. In a state like Texas, where voter engagement among young people and people of color is extremely low, registering people can make a huge difference!

There are other ways to help with voter engagement. For example, you could organize a group of friends and classmates to go vote together.

Voting makes a huge difference, especially on local elections! Create change in your community by increasing engagement at a local level.

Attacks on abortion, abortion funding, and reproductive health access will continue to happen. Just yesterday, a 20-week abortion ban bill was blocked by the Senate. There are things we can do beyond calling our representatives and senators to stop these attacks. For example, in my hometown, there is a local abortion fund called Frontera Fund. This effort is meant to help people seeking an abortion with the expenses. The Fund relies on local support and fundraising efforts. There are abortion funds in a lot of cities, and they almost always need more support. If you are financially able, donate! If you have a talent for fundraising, launch an effort! Even 20$ can make a difference to someone seeking an abortion.

Unfortunately, reproductive health clinic harassment continues to be a problem for thousands of patients seeking abortion care. In many clinics, there are volunteer positions for escorting people into the clinic. Clinic escorting allows patients to feel safe, and it stops harassers from causing any harm to patients. By volunteering, you can make abortion access less intimidating for patients.

Participate in local town halls! Making your voice heard at a local level is an effective way to move into local activism. Townhall meetings cover local issues and allow city residents to bring up important issues.

Hear me out! We need less white cis-hetero men in office! For government to best serve its people, it must look like the people its representing. We are not all white straight men. Run for office! Encourage your friends and peers to run for office! Local government benefits from young passionate people taking positions of leadership. Even the act of running for office can inspire so many more people to do the same.

Last year, my hometown led a campaign to pass an anti-border wall resolution! Young people were able to talk to city commissioners and raise up local support for the resolution. You can do this in your hometown, on campus, or through your high school student government!

Get involved with organizations in your community and on campus! Through organizations like URGE, you can get the tools and resources to educate on campus. Education is such an important role to foster civic engagement. Similarly, lobbying and advocating in your state government can be something you can do through organizations.

For me, the most important thing I did when I first started getting involved was have tough conversations with the people around me. I talked to my family, friends, and co-workers about the issues that were important to me. Though it can be uncomfortable and daunting, it is necessary to talk to the people closest to you. Because I opened dialogue with my family, now my mom identifies as pro-choice! My parents are no longer against LGBTQ+ equality, and now they have tough conversations with their family, co-workers, and friends.

Your story is the most powerful thing you have. Share it! Efforts like the 1 in 3 Campaign is a good example of how your story can make a difference. You can also use your story to table on campus, or when you lobby your legislators.