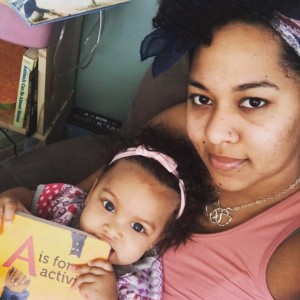 A few weeks ago on a sweltering, Kansas afternoon, a friend and I stopped by a sub shop near my house for lunch. The store was empty because the lunch crowd hadn’t made their way in yet. I had been to this establishment several times before because my partner loved their subs and needed no excuse to go there. We ordered, sat and I nursed my just woken up daughter who was a bit cranky. Our little nursing session ended a few minutes later, just as the manager brought us our food. As he put the food on the table he looked at me and said “would you like a towel? This is a family restaurant, You can’t just be out here like that. Either I can bring you a towel or go to the back.” He repeated the bit about it being a family restaurant and he offered me a towel again. In shock , I declined; I didn’t need his towel and we were done nursing. He took off before I could tell him that Kansas law allowed me to breastfeed wherever I wanted to. I sat there in shock– 12 months into nursing and the dreaded confrontation I had only seen on facebook viral videos had happened to me. My friend was incensed. My daughter was my family. I had every right to be there.

When I got home, I reflected on my journey nursing in public. I was fuming. I left a review on the restaurant’s Facebook page and over the next few days, I watched the whole incident blow up into a conversation about the right to breast (chest) feed in public. I received a lot of amazing support which resulted over 30 caregivers coming to the restaurant for a nurse-in. But the negative comments stuck out like an eyesore. I heard comments that started with “back in my day women had morals” and eventually concluded that “she just wants attention”. The news stations framed the incident as a conversation about whether or not a caregiver should nurse in public. I wondered how feeding a child could be considered a moral argument.

How have we managed to socialize and politicize the female body so much that a basic function of breast tissue is up for debate?

I digress. Back to my nursing journey. I recognize that I have a lot of privilege. For 6 months, I took my child to work with me where we nursed on demand. I travelled in my community and spoke to the public with her strapped to my chest in a baby carrier. I met diverse crowds of people from different age demographics and did my part to dispel the stigma our society carries when it comes to women and their bodies. I grew up in Botswana where it is perfectly normal to see a mother nursing in public. I know that America is backwards in some ways but it baffles me that nursing a child is a radical act.

I remember being scared to nurse in public for fear of being attacked or shamed. But Baby had to eat when she had to eat, so I got over my fear real quick. When I started nursing in public, I never got any daggered stares; all I got were sweet smiles.Once someone called me mentally ill, but that I know that remark said more about them than it did about me.My partner stood by me, hackles raised, ready to fight anyone who dared to say anything.

As I breastfed, my confidence grew, as did my passion for advocating for chestfeeding. Black women face huge barriers when it comes to maternal care in this country. Maternal mortality rates in the US are abysmal and black parents also have the lowest rates of chestfeeding in the country. Not only are our bodies sexualized from a young age, but black women have little to no post partum support either. I feel a personal responsibility to show parents that they have choices and that chestfeeding is one of them. I am a firm believer of positive, diverse representations of the black folk and I am proud to do whatever I can to be an example.

We need to stop sexualizing bodies. I was lucky enough to live in an amazing community that rallied behind me. The restaurant was provided with education on Kansas law regarding breast(chest)feeding as well as given resources on how to educate their employees. They even signed a pledge to become a safe space for nursing caregivers. It felt good to know that they are committed to change. I never wanted to start a protest; all I wanted was a damn sandwich. But now that I’m here, with my community behind me, I’m not backing down and I want other caregivers to know that they are not alone.

Written by Farai Harreld. Farai is Zimbabwe-born, Botswana-bred; Kansas livin’ new mama with a love of life and a penchant for all things minimalist and eco-friendly. You can read more of Farai’s work at thehillbillyafrican.com.