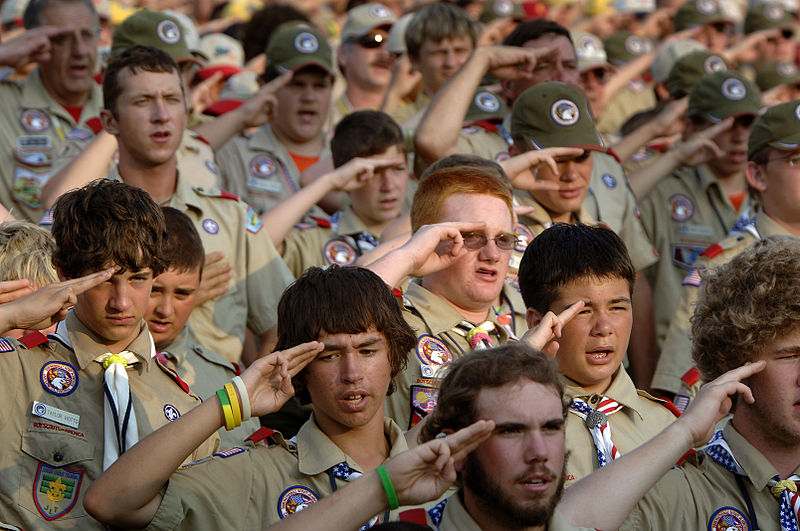 Joining the Boy Scouts of America can be a tricky thing for someone who identifies as anything other than cisgender and heterosexual, and despite recent changes to their membership requirements, the BSA is still wrangling with conflicting factions within its own organization. Now, some scouts are trying to build a more inclusive organization at the ground level.

In 2013, the BSA made national headlines when they openly debated changing membership requirements to allow scouts to join regardless of their sexual orientation. As a compromise measure, the BSA still excluded hiring lesbian, gay, bisexual, transgender and queer leaders until last July, when the executive council passed a new guideline stating that scout troops may hire whomever they wish to fill leadership roles. However, troops chartered by a religious organization may still deny a leader membership based on sexual orientation or gender identity alone.

The fact remains that 70 percent of all Boy Scout Troops are chartered by a religious organization. Of those, half are sponsored by the Jesus Christ Church of Latter-Day Saints, which responded to the resolution with a statement saying it would reconsider its financial and organizational support for the BSA, but decided to stay when repeatedly reassured they could continue to ban gay leaders. The BSA, too, issued a memorandum to the Lutheran Church of Missouri Synod stating:

“Resolved, That The Lutheran Church—Missouri Synod will respect the membership standard of the Boy Scouts of America, including the stipulation that membership in Scouting may not be denied to a child on the basis of sexual attraction alone, and the further stipulation that the local pastor of the chartering congregation and the leaders of the local troop have the authority to set boundaries, including the determination of whether a Scout is promoting a particular social or political agenda, advocating for a moral view that is inconsistent with the church, or becoming a distraction to the troop, and take such action to enforce set boundaries up to and including removal from the troop; therefore be it finally”

A 2013 Clarification to the membership laws published on the BSA website states that any scout may be removed from their troop for “sexual misconduct” or promoting “a political position” or even not living life in accordance to the scout law or oath, as determined by a troop’s advisers. In effect, a scout or leader can be booted from the troop based not on their orientation but their behavior, which some organizations argue can be arbitrarily defined to mean “not heteronormative.”

One such organization, Scouts for Equality, has lobbied for years to change BSA laws to make them more inclusive, also denouncing the BSA’s standing ban on girls outside of Venturing (a co-ed BSA organization for those 14 and older) and on the BSA’s total exclusion of scouts who profess no religious belief. This week, they released a statement naming their intention to build an online map of all inclusive units in the country. As of their last press release, they had a little over 50 troops already registered. The organization also unveiled plans to award troops that do not discriminate against leaders for their sexual orientation with an “Inclusive Unit Award”, an effort to bolster support for inclusive units by coordinating with smaller organizations, such as Oklahomans for Equality, which will be hosting an all-inclusive troop outside of the Dennis R Neill Equality Center in Tulsa.

Other organizations are returning to the BSA to sponsor inclusive troops as well, including the Union for Reform Judaism and various chapters of the Unitarian Universalist Church.

Organizations interested in starting their own inclusive Boy Scout troop may find out how here, and also register their own troop for the online map. Scouts may also order patches for their uniforms detailing their support for Scouts for Equality, though they are not technically allowed to be worn at BSA ceremonies, as are all unofficial patches. Donations are welcomed on the Scouts for Equality website.