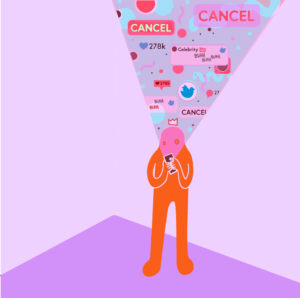 August 5th, 2019 was the day everything changed….that was the day…I was #cancelled.

All jokes aside, I have recently seen a lot of conversations happening around the phenomenon of cancel culture. The entire premise behind this ideology is to #cancel/cut out/stop being friends with/stop working with people who allegedly have been perpetuating or engaging in problematic behaviors. At first glance, it kind of makes sense. We should hold people accountable, especially if they are repeat abusers of power and people.

However, that is not what cancel culture has given us. Instead, we see people with personal vendettas come out and try to single out and ostracize one person due to personal issues that could have been resolved with simple and firm communication, or could have just been avoided if people acted reasonably and understood that at the end of the day, no one really cares who you have one on one beef with.

I have seen this especially become a problem in activist and organizing spaces; the entire reason behind our organizing should be to build a sense of community and meet people where they are at. This is how we collectively learn as a mass. We did not all come into the world of social justice being 100% aware of every issue and every disparity that has ever happened in the existence of the world and humanity. If you did- 100% props to you and I hope you help in the education and liberation of us all.

Time and time again I see activists butt heads over the smallest things that do not matter, and it ends in people leaving organizing as a whole. We are losing valuable skills and people over the fact that someone wants to act like an immature high-schooler and go blast and expose people on Twitter, but not practice the tenants of conflict resolution. There are a few recurring community guidelines I see implemented at meetings and conferences, them being: Throw glitter, not shade, and assume best intentions.

While there are exceptions, I’d like to believe that most people that get into activism and organizing are doing this to build our liberation as people and do good. And while the expression of anger is healthy and justified, I don’t believe that the verbal and emotional abuse that comes out of cancel culture does any good.

This leads to the question: is cancel culture even real?

In my opinion, it’s a bunch of bogus.

If cancel culture was truly a thing, men like R. Kelly, Chris Brown, Woody Allen, and Harvey Weinstein would not have thriving careers. Recently this topic came up in a conversation with some friends, and one person said that if it was called “accountability culture”, maybe we would see less abusive people in our spaces.

With my own experience, people were trying to #cancel me as a form of gaslighting and even went as far as to contact people I work with and my closest friends as a way to get back at me for removing myself from a toxic and borderline abusive environment. I have seen and experienced a lot of people involved with community organizing who are ridiculously self-righteous and narcissistic, to the point where they do not believe anything they do or say can be wrong. They are always right, and if you even so much as question them on this or show any form of uneasiness, you automatically become a threat.

As activists, it is very important to understand that we will never know everything and there are just certain things that we will never have to experience. This is why general acceptance and togetherness is what will help us learn, empower, support, understand, and educate one another.

It is important to look out for abusers in our spaces, and in no way shape or form should their behavior be tolerated or ignored. We need to sit them down, talk to them, and ask them to apologize, and maybe even leave. And these can be incredibly difficult conversations to have. But I think with the right support and right group, these things can be addressed in a way that does not need to be violent or maleficent.

I have seen a lot of division in activism, and I will admit, there have been times that I have been in the wrong and have acted in ways that weren’t ideal or were solely based on the temporary emotions I was feeling. This has ended with people leaving and me losing friendships, but I am doing my best to fix this behavior and am trying to become more cognizant of the things I say and do.

In our San Antonio City Activist Network and student chapter at the University of Texas at San Antonio for URGE, we have strongly implemented and promoted the use of the 24 to 48-hour rule. This means that if someone did or said something that didn’t sit right with you or made you uncomfortable, that you should let it sit for a day, and then in a day or two, bring this up with the person (or get someone else to talk with them) and explain how you felt and give suggestions on how they can change their behavior. This allows for constructive and meaningful conversations to happen, and additionally, gives people opportunities to improve and mend their relationships with the people they work with.

I genuinely hope that cancel culture will soon be a thing of the past, but I guess, for now, let’s do our best to not participate in it.