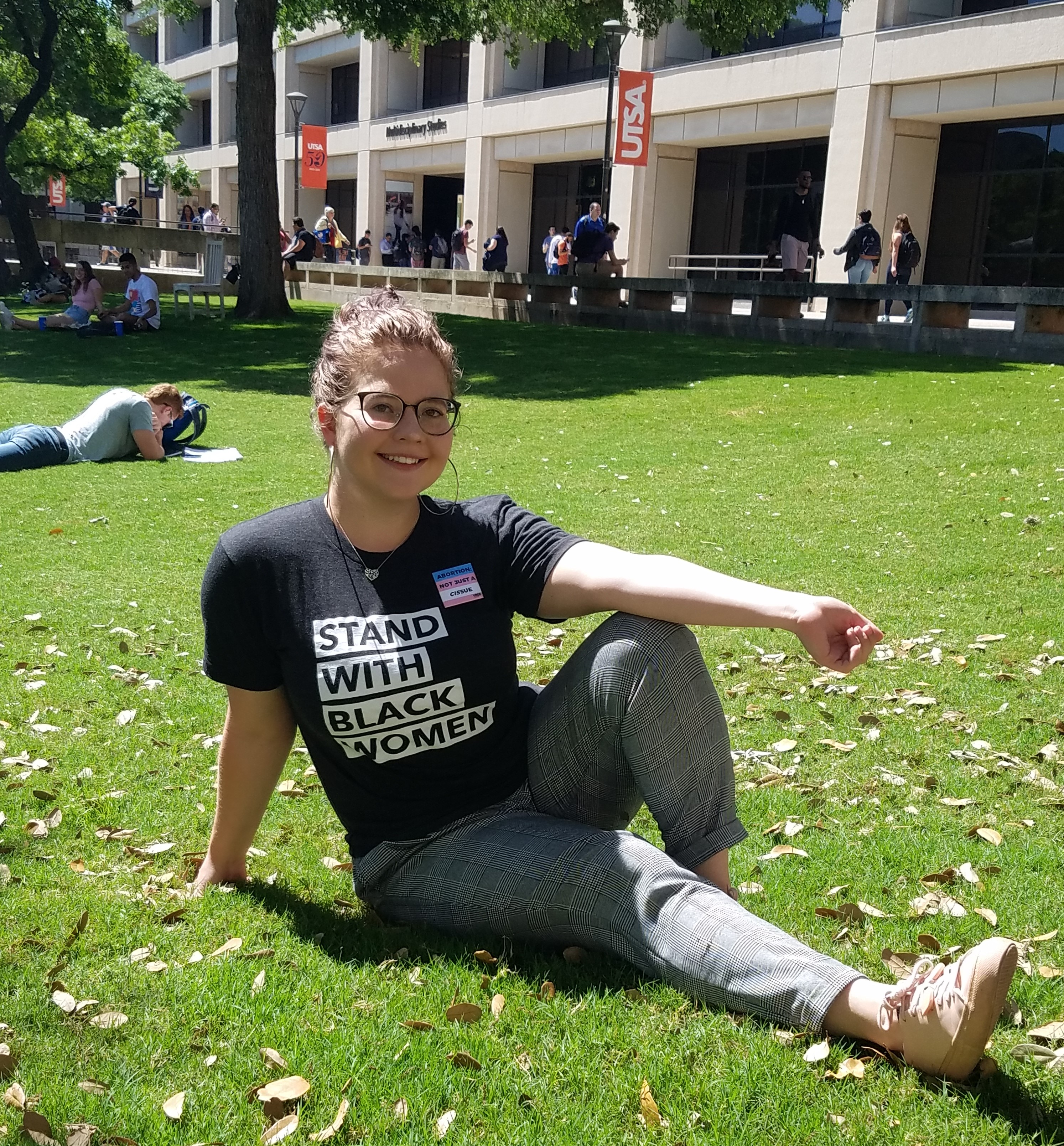 Major: Public Health
Hometown: San Antonio, TX
Favorite writer: Angela Davis
Favorite sex scene from a movie/TV/book: Zombeavers, in the middle of hiding from their friend that just got attacked by a zombie beaver, two characters decide that it is a great time to have sex, but their now-zombie friend breaks into the room and kills one of the characters by biting off his genitals. We love a good dismissal of unnecessary cis-heterosexuality!
Hidden Talent: I can name all of the movies Seth Rogen has starred in and have gotten pretty well at drawing in the pop-art style.

Digital Organizing in These Uncertain Times

With the emergence of the SARS-CoV-2 and COVID-19 outbreak, many people who work in organizing have been forced to postpone events, conferences, and campaign work. For many of us, it felt like all of the hard work we put in was for nothing, especially now that we’re social distancing and quarantining in our homes with little information and many unanswered questions. As an organizer who does paid work temporarily or for short campaign “seasons,” I was especially worried about the prospects of my work, especially as it relates to the full time organizing jobs I had applied for. Many organizations I’ve applied to have sent out letters of apology stating that, “at this time the hiring process is being postponed but your application will remain on file” or suddenly shifted… Read more »

In the 21st century, much of societal and pop culture interpretations of feminism come from the glamorized idea of the “independent, strong, and self-sustaining” white woman. The CEO of a big company, large and in charge, bossing people around, and taking no one’s bullshit. It’s a 1st wave suffragettes’ dream- being afforded the financial and social power of a rich white man. I understand the appeal of strengthening and empowering women to take over the workforce and to further their professional careers. But, I don’t think the appeal of being on the same level as a man who abuses his employees and pays them unfairly, is what is going to fix professional/work-force sexism and wage inequality. Breaking the glass ceiling seems fun until you find yourself in a boardroom meeting… Read more »

On January 21, 2017, the notorious women’s march on Washington happened. The day after the inauguration of current United States president, D*nald T*ump. And while it seemed as though there was a collective disappointment in the outcome of the U.S. 2016 election, there was still much division amongst the thousands of people that participated in the march and marches across the country, and the world. Behold, the pink pussyhat. What was once the token identifying mark of 21st-century feminists, quickly became the symbol of white “feminists”, trans-exclusionary radical “feminists” (TERFs), and sex worker-exclusionary radical “feminists” (SWERFs). Many organizers and intersectional feminists have spoken about why pussyhats are nothing more than a divisive tool that should not be brought into reproductive/civil/social justice spaces. While attending marches and rallies may be the… Read more »

Dismantiling Rape Culture via The Arts

Trigger Warning/Content Warning: Sexual Assault and R*pe Somehow, I think we are finally experiencing a culture shift with rape culture. I don’t know exactly what I was expecting this change to look like, but I knew it was going to be a slow process. Earlier this year I was involved with a movement that focused on shifting culture in our communities to combat the issue of rape culture. After conversations with others, various protests, and an entire conference, we were able to get our community to see how much rape culture is embedded in our everyday lives. With this insight, we can move forward and try to do better than past generations. Recently I realized how much art is contributing to the dismantling and destruction of rape culture. In her… Read more »

August 5th, 2019 was the day everything changed….that was the day…I was #cancelled. All jokes aside, I have recently seen a lot of conversations happening around the phenomenon of cancel culture. The entire premise behind this ideology is to #cancel/cut out/stop being friends with/stop working with people who allegedly have been perpetuating or engaging in problematic behaviors. At first glance, it kind of makes sense. We should hold people accountable, especially if they are repeat abusers of power and people. However, that is not what cancel culture has given us. Instead, we see people with personal vendettas come out and try to single out and ostracize one person due to personal issues that could have been resolved with simple and firm communication, or could have just been avoided if people… Read more »

Anytime a protest happens on my campus, whether it be a counter-protest or a protest in response to signs to something, the argument of hate speech versus free speech is brought up. It seems as if nobody can come to a consensus, and it usually ends in people shaming our university administration and policies for allowing and tolerating “hate speech”. I often find myself torn between arguing for and protecting something a constitutional right and advocating for what I feel lines up with my morals and beliefs. This truly brings up the question: Is hate speech, free speech? Attempting to answer this question has forced me to do a lot of research. So much so, that I’ve read about 50 court cases on the matter. Yet, somehow I feel like… Read more »

Whenever I publicly identify myself as an activist, I often find myself looking into a metaphorical mirror, staring at my reflection, asking me, “But are you really?” The question then leads me down the never-ending rabbit hole of imposter syndrome. I know that most of this comes from my white privilege and trying to be as self-aware as possible about it, and making sure that I am utilizing it for good and the protection of others. I am very fortunate to have both a supportive and educational activist community, where women of color (WOC) validate me and help me change my language and learn when to step back. This kind of support and learning is what motivates me to continue to be involved with my community as much as I… Read more »

San Antonio’s Economic Segregation Was and Still Is Intentional

The 210. Countdown city. Dueces dimes. San Anto. San Antonio, Texas is the 7th most populous city in the United States. It has ranked both 1st and 2nd place in reports on projected city growth across all America. The city is often promoted as family-friendly, and a great place to settle down and retire. I was born and raised in San Antonio, and currently, work and go to school here. The city has changed before my eyes, and sometimes I wonder if it was for better or for worse. It is well known amongst San Antonians, other Texans, and people across the U.S., that San Antonio is one of the most economically segregated cities in America. Median household incomes, the percentages of people living at or below the federally recognized… Read more »

Instead of Trying to “save” Sex Workers—Pay Them

Saturday, September 14th, 2019 was the first-ever Sex Worker Pride day. The day was aimed at highlighting the beauty and self-told stories of sex workers and bringing positivity around a career that is often stigmatized and criminalized by the media and the general public. I saw so many beautiful posts about the love, support, and sexual liberation that many sex workers have experienced and have been surrounded by. Launched by the Global Network of Sex Work Projects, this day of pride is focused on these tenants: Sex Worker Pride is an opportunity to celebrate and share stories of sex workers’ self-determination and the achievements of the sex worker rights movement over the last year. Sex Worker Pride extends to all marginalised by criminalisation, discrimination and stigma across the sex worker movement… Read more »

From the most recent data available from the Guttmacher Institute and the American Journal of Public Health, approximately 1 in 4 women will have had at least one abortion by the age of 45. While this statistic does not include research around trans men and non-binary people that obtain abortions, it still goes to show that this is a very common procedure; but people do not choose to talk about it that way. I’ve seen protesters outside of clinics with signs that say “women regret abortion” and “men regret lost fatherhood”, and other anti-abortion phrases. In my early exposure to organizing around and for abortion rights, I found that many people I worked with, and even myself, would say things like, “No one wants to get an abortion…it is such… Read more »