On January 21, 2017, the notorious women’s march on Washington happened. The day after the inauguration of current United States president, D*nald T*ump. And while it seemed as though there was a collective disappointment in the outcome of the U.S. 2016 election, there was still much division amongst the thousands of people that participated in the march and marches across the country, and the world. 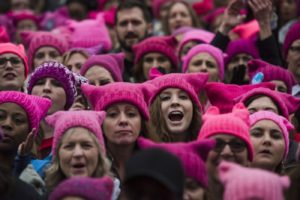 Behold, the pink pussyhat. What was once the token identifying mark of 21st-century feminists, quickly became the symbol of white “feminists”, trans-exclusionary radical “feminists” (TERFs), and sex worker-exclusionary radical “feminists” (SWERFs). Many organizers and intersectional feminists have spoken about why pussyhats are nothing more than a divisive tool that should not be brought into reproductive/civil/social justice spaces. While attending marches and rallies may be the only exposure to activism some people have due to accessibility issues, time, life, and safety, it is not the end-all, be-all of activism or organizing.

In my own experience, most of the white people, primarily cis white women, that attend marches and rallies are there for photo-ops and to hold signs that say “this pussy grabs back”, “anything you can do, I can do bleeding”, etc.. Essentially a lot of things that elude to their narrowed experience of “feminism” from their perspective as cis white women with vaginas. The only people who seem to be speaking of the issues of racism, sexism, islamophobia, whorephobia, and xenophobia are women of color, primarily Black Women, and other people from marginalized communities.

Criticism may not always be the best way to help people learn and grow. But white women have taken over feminism and activist spaces for too long. The First Wave of feminism in the United States was filled with white suffragettes like Margaret Sanger and Elizabeth Cady Stanton, who began to organize because Black men got the right to vote before they did. That outraged white women, not because they were men, but because they were Black. Angela Davis’ book, Women, Culture, and Politics describes the discrimination Black, Native, Latina, and Asian women experienced when they tried to work with these suffragettes on issues such as access to healthcare, racism, and forced sterilization. Instead of coming to a consensus and trying to work together, the suffragettes did little to nothing to help WOC. As Davis described in her book, WOC were invited to suffragette meetings, but the demands and issues that they were organizing around were never added to the list of demands and goals that the suffragettes had. 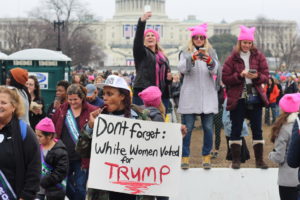 In 2018, the organizers of the women’s march in my city, San Antonio, specifically asked attendees in all social media posts and fliers to not wear pussyhats because they were trans-exclusionary and did not reflect the goals or ideologies that the organizers were trying to promote. However, people still showed up in pussyhats. And they were white women. Several people, including myself, tried to explain to them the reasons why the hats are a no-go, but they just continued to wear them. In no way, shape, or form do I think that I am excluded from criticism because I am a non-binary white person. I am quite femme passing, and as someone who presents to the world as a white woman, I understand the privileges and consequences that come with that. Therefore I am working on being less vocal in activist spaces, allowing for others to speak, and allowing myself to listen and learn more. I know that my intentions in organizing are not malicious, but others may not know that right off the bat. That’s why my goal is to allow people to feel safe and empowered to share their stories and their voice. I never want to hear another white person say, “I am the voice for those who cannot speak”. As white people with privilege, we must act as allies in protecting our communities and aiding in the liberation of all.

During the 2019 Golden Globe awards, Michelle Williams’ acceptance speech covered a variety of topics such as abortion and voting. However, when she spoke about voting, she urged women to, “…vote in your self-interest”. Michelle Williams is a white woman, and white women have been voting in their self-interest for decades. That self-interest primarily being their whiteness. We must be voting in the interest of all people, especially those who are most marginalized and discriminated against in this county. I’m urging for white women and white people, to vote in the self-interest of black women, of immigrants, of incarcerated people, of sex workers. We cannot continue conversations around voting, social/civil/reproductive justice, without addressing white supremacy and its place in different spaces and institutions, especially if we are white people organizing around these issues.