Instead of Trying to “save” Sex Workers—Pay Them

Saturday, September 14th, 2019 was the first-ever Sex Worker Pride day. The day was aimed at highlighting the beauty and self-told stories of sex workers and bringing positivity around a career that is often stigmatized and criminalized by the media and the general public. I saw so many beautiful posts about the love, support, and sexual liberation that many sex workers have experienced and have been surrounded by.

Launched by the Global Network of Sex Work Projects, this day of pride is focused on these tenants:

Sex Worker Pride is an opportunity to celebrate and share stories of sex workers’ self-determination and the achievements of the sex worker rights movement over the last year.

Sex Worker Pride extends to all marginalised by criminalisation, discrimination and stigma across the sex worker movement and celebrates the diversity within our community during International Sex Worker Pride. 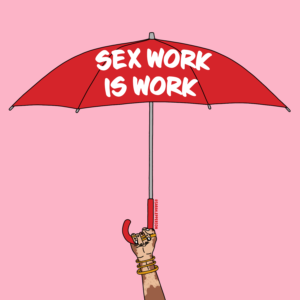 Sex work exists in many presentations; prostitution, escort services, stripping/dancing, phone sex operators, pornographic film stars, and in the past decade, online sex services like paid for sex chats, live stream videos (known as being a “cam girl”) and selling of nude photos have become very popular because of convenience and increased online engagement.

There are many other forms of sex work that do not necessarily require the act of sex to be exchanged/performed.

Sex work is broadly referred to as consensual sex or sex acts exchanged by consenting adults in exchange for money or other goods/services. This is not to be confused with human or sex trafficking, where people, primarily women, and children, are targeted and put into a circle of exploitation and abuse. This goes to say that abusers do exist in the consensual sex work world, and not all consensual sex work is decriminalized.

Three other days dedicated to fighting for sex worker’s rights are observed on March 3rd, June 2nd, and December 17th. They focus on achieving labor equity and equality, decriminalization, justice, and the end of violence against sex workers. While these separate days bear a huge importance in their significance and existence, we must also acknowledge the intersections of identities and interlocking oppression that many sex workers face.

Pride month, celebrated in June, gives homage to the 1969 Stonewall Uprising in Manhattan- a protest and movement that was started by trans sex workers of color. Sex workers that are a part of the LQBTQIA+ community often face increased violence and oppression. This is heightened when sex workers are POC (people of color), who often face harsher legal consequences when arrested as opposed to their white counterparts.

In cities like New York, many trans women have expressed the issue of being targeted by police officers under the assumption that they were sex workers. Many are arrested for just having condoms on their person which is considered supposed evidence of sex trafficking and illegal sex work. This is the care in major cities such as Washington D.C., New York, Los Angeles, and San Francisco.

Currently, the only state in the U.S. that has decriminalized some prostitution and escort services, is Nevada. Sex workers exist, live, and work all over the country, and often have to resort to un-monitored sex work businesses and services in their area. In 2018, the SESTA/FOSTA (Stop Enabling Sex Traffickers Act and Fight Online Sex Trafficking Act) bills became law, which harmed many online sex businesses that focused on consensual sex work. The false assumption that sex work is associated with sex trafficking has made it very hard to get and push for a full-decriminalization of sex work on local, state, and national levels.

In Texas, the interstate highway, I-10, has been known as one of the largest sex trafficking corridors in the country. Large cities such as Houston and San Antonio have established many task forces to fight sex trafficking, primarily of teenage girls, in these areas. While these intentions seem well, many of these task forces along with state legislation harm sex workers. They criminalize illegal sex work and prostitution at the same level human/sex trafficking, and falsely associate and group sex work, with sex trafficking.

Many strip clubs are often harassed by law enforcement, as well as other organizations that try to get dancers “out of” this career choice, and “on a better path”. In San Antonio for example, there have been multiple incidents reported of dancers being harassed by in-uniform police officers that were supposedly investigating the club for potential sex trafficking ties.

I have personally had the opportunity to meet with the District Attorney’s office of San Antonio as apart of a group of organizations focused on combatting human trafficking and domestic violence in the city. In one of the meetings I attended, the concerns brought up by the San Antonio Sex Workers Outreach Project chapter were completely dismissed and the entire conversation was centered around associating all sex work with sex/human trafficking. Many other organizations I have worked with in the past often say that women that work as strippers or escorts are at higher risk of developing addictions to drugs and alcohol and need to be introduced to better lifestyle choices and career options.

It is interesting to see this negative association when it comes to sex workers. Yet, when major celebrities, musicians, and college frat boys engage with sex workers consensually, it is glorified. It’s seen as a cool thing to do and be a part of. We have songs on the top music charts about strip clubs, escorts, drugs, and alcohol, yet so many strippers and other sex workers are shamed and stigmatized. So so much so that many have been physically and sexually abused and even murdered.

Where is the line drawn?

To get involved with activism surrounding sex worker rights, decriminalization, and the liberation of sex workers, become a member or donate to your local SWOP (Sex Workers Outreach Project) chapter or the Global Network of Sex Work Projects. 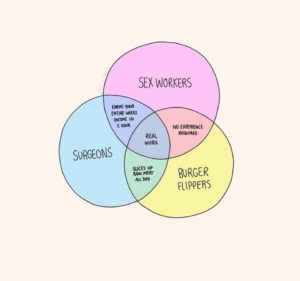 Image courtesy to the artist known as Exotic Cancer, visit their site at https://www.exoticcancer.com/