San Antonio’s Economic Segregation Was and Still Is Intentional

San Antonio, Texas is the 7th most populous city in the United States. It has ranked both 1st and 2nd place in reports on projected city growth across all America. The city is often promoted as family-friendly, and a great place to settle down and retire. I was born and raised in San Antonio, and currently, work and go to school here. The city has changed before my eyes, and sometimes I wonder if it was for better or for worse. 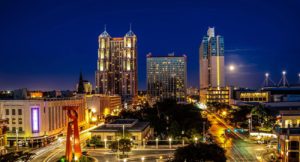 It is well known amongst San Antonians, other Texans, and people across the U.S., that San Antonio is one of the most economically segregated cities in America. Median household incomes, the percentages of people living at or below the federally recognized poverty line, and the number of grocery stores available in certain parts of the city are all very telling and reflect the red-lining that occurred in the early 1930s.

Shown below are maps, dated 1935 from the HOLC San Antonio City Survey Report 1, for the “grades of security” and the “racial concentrations” of the city at the time. 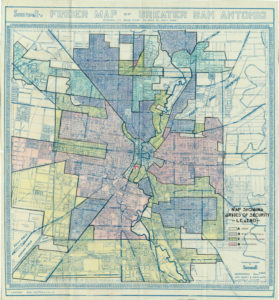 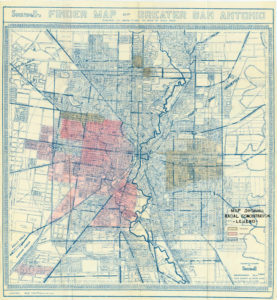 The grades of security were based on the regions of the city that were deemed more “safe” by city officials. The areas with the highest safety ratings were more likely to get approved for loans from banks to establish homeownership and local businesses. If one were to compare these maps to the maps of San Antonio today, they would quickly see that the lasting effects of this economic and racial segregation are still felt today. The West, East, and South sides of San Antonio remain dramatically different from the Northside. Areas like Stone Oak, Alamo Ranch, Leon Springs, Alamo Heights, and Castle Hills are known for their wealth and “bougie-ness”. Some of which, have even become small cities within San Antonio, and even have specific fire and police departments.

Red-lining has and will always be an intentional practice of segregation. In the maps from the HOLC San Antonio City Survey Report, the areas labeled as “definitely declining” and “hazardous” for potential bank lending were also the areas with the largest populations of Latinx and Black people.

This is nothing but a targeted attempt at making housing and community business development harder for POC (People of Color). Not only did this redlining increase the crime and poverty rates in urban areas. It caused the number of health clinics, hospitals, and actual grocery stores to differ significantly in the West, East, and South sides of town. City officials in the ’30s created food deserts that exist to this day. There are about 3 large grocery stores that I know of in the Downtown/Southside area. Where I currently live, there are 10 grocery stores minimum within a 5-mile radius. This is embarrassing. Additionally, life expectancy decreases significantly in these areas, and the rates of diabetes and heart disease are highest in the areas that were labeled “definitely declining” and “hazardous.” 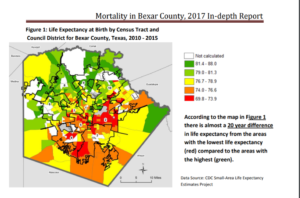 These are the same areas where access to healthcare and fresh produce is severely limited.

The median household income of San Antonio is under $50K, according to US Census Data. Since the opening and development of areas in downtown San Antonio such as the Pearl Brewery and the Blue Star Complex in Southtown, the interest to buy and rent housing around these areas has gone up dramatically. Rent often exceeds $1,200/mo. for a standard two-bedroom apartment, and recently I saw a condo listing near Southtown, for over $600K.

The housing crisis in San Antonio also has a dark, dark history. The 78207 zip code of San Antonio is the poorest in the city and had notorious housing slums and projects that were known nation-wide. People were living in horrible conditions and city managers and developers looked away; reverting their focus to the prospect of city tourism. To this day, some people don’t even have air conditioning units in their homes, and average temperatures in the summer are about 100°F. I recall several news stories in the past decade of the city trying to deem people’s houses “uninhabitable”, and at the same time, were not offering permanent replacement housing that would be affordable for these families. The housing displacement of people has been occurring since the development of Hemisfair Park. The trees by the Tower of the Americas used to be in the front yard of the former home of one of my acquaintance’s family members.

The city created a renovation grant or house buy-out program in areas of SA that have a high traffic of tourism; offering families money to move out of their homes. They then renovate the homes, and sell them or rent them out for 5 times the amount the land and housing are “worth” in the area. This increases property taxes. Over time, this forces other families to move out because they cannot afford to live in the area anymore. Then suddenly it becomes overridden with over-priced coffee and paleta shops that are owned and operated by rich people from Austin.

A lot of this is hidden under the guise of city/urban development and the promotion of city tourism. But the fact that San Antonian families that have lived here for generations are getting the short end of the stick, shows that this is a harmful practice. We need to be giving all people in San Antonio access to housing, food, water, healthcare, and education. When my city district representatives and mayors say that they want to promote the well-being of San Antonio families, which ones are they talking about? The rich white ones? Because schools on the southside keep getting shut down, many children don’t know when or where their next meal will be, and families are being displaced and discriminated against because of their income, skin color, and native language.

For more commentary on life in SA and the history of the city, please follow Denise M. Hernandez @DeniseYLosDinos (twitter), founder of SAbiduría (website tejanathings.com) and Jose Arredondo @sportsguyjose (twitter), a TAMU-SA grad and writer for the SA Express News.